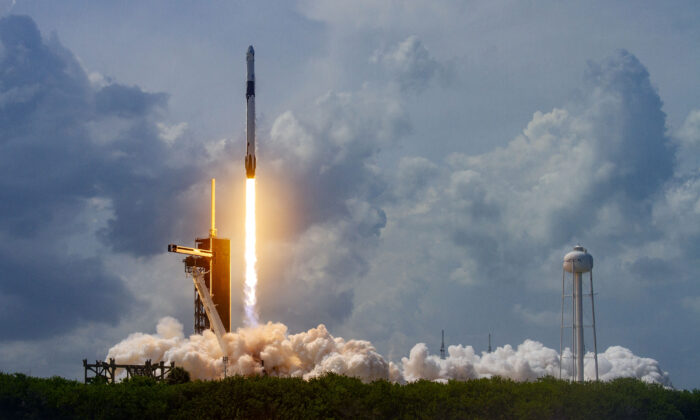 The recent successful launch of the SpaceX Falcon 9 rocket that propelled two astronauts aboard the Endeavour capsule into orbit, where it docked with the International Space Station, opened a new chapter in U.S. space exploration.

Unlike the Apollo era of a half-century ago, when NASA called the shots and private companies served as mere contractors, today, it’s increasingly the private sector that is leading the way in all aspects of space innovation. From reusable rockets to plans to install a satellite-based internet, nimble private companies are already showing that they will be the vanguard of America’s space future.

The role of private companies will be crucial in America’s bourgeoning space rivalry with China and Russia.

Not only will the likes of SpaceX, Blue Origin, Virgin Galactic, and other firms be vying for position in the new space race, but Cape Canaveral’s storied launching pads will have to share the honors with other locations eager to host the next blastoff.

One of those locations is in Camden County, Georgia, about 140 miles north of Cape Canaveral. Sparsely populated Camden is Georgia’s southern-most coastal county. Once in operation, Spaceport Camden, a partnership between the county and commercial space companies, will be the only exclusively vertical, nonfederal range on the East Coast and the site of an aerospace industrial park. Situated on the I-95 corridor next to the Atlantic Ocean, and surrounded by a large undeveloped buffer zone, the site provides a nearly unrestricted range for the launch of spacecraft in a wide array of orbits.

Spaceport Camden’s southerly 31-degree north latitude and favorable southeast azimuths enable launches with satellites to maximize the velocity boost from the rotation of the Earth allowing more mass to reach orbit versus higher latitude launch sites. As a commercial property, Spaceport Camden eliminates the need for space companies to sequence their launches alongside government-directed payloads or be saddled with certain legacy systems, processes, and concomitant friction costs.

However, the spaceport’s promise of spearheading the region’s post-COVID-19 recovery by bringing high-paying aerospace jobs to the Savannah-Jacksonville corridor is being thwarted in the bowels of the Federal Aviation Administration (FAA).

Camden officials have been waiting five years for the FAA to complete an Environmental Impact Statement (EIS) for the project. While the FAA published a draft version of the EIS for Spaceport Camden in March 2018, that report identified no environmental issues, from air and water pollution to noise and visual effects, that couldn’t be mitigated in some way, for medium-large launchers similar in size to a Falcon 9 or Atlas V launcher that places school-bus-sized satellites into orbit.

In December 2019, county officials asked the FAA to pause its application for a spaceport Launch Site Operator’s License so it could narrow the scope of the project to small launchers about one-tenth the size of medium-large launchers; the project’s directors want to focus exclusively on smaller rockets that will ferry satellites into orbit.

Even though Spaceport Camden has already cleared critical safety and launch-site location reviews and environmental assessment for medium-large launchers, the FAA in May announced that it would require a new environmental review for the scaled-down project.

This would be like the FAA requiring a new EIS for the Atlanta Hartsfield International Airport because a new commercial carrier wanted to fly small Cessna aircraft, and not Boeing 747s. The FAA projects that completion of the revised EIS will take until October 2021, adding nearly 18 months to a process that has already gone on for five years.

The FAA’s insistence that the project undergo a completely new EIS to account for the downsized rockets has pleased environmental groups who have opposed the project from the start.

“When Camden County changed its application to small rockets, that action effectively hit ‘restart’ in the environmental review process,” Brian Gist, lead attorney for the Atlanta-based Southern Environmental Law Center, told GeorgiaRecorder.com. “Small rockets fail at much higher rates than medium to large rockets, so the FAA must now consider the environmental impacts of these risky, unproven vehicles. Given the enormous risks Spaceport Camden poses to public health, private property, and Cumberland Island, this is not the time for shortcuts and half measures.”

But Maj. Gen. Robert S. Dickman, USAF (ret.) and a Camden County resident, dismisses the notion that the proposed spaceport poses a threat to public safety. “Having overseen the Eastern Range for the United States Air Force and been involved in commercial space for the past decade, I can attest to the growing launch demand in the commercial space sector,” he said. “Spaceport Camden is an ideal location for the safe launch of the small satellites and rockets that are rapidly becoming the most important segment of this new market.”

Initially, officials at the Naval Submarine Base Kings Bay 10 miles to the south asked if the spaceport’s launches would interfere with military training and vessel movements within the Navy’s designated sea and air space.

Recent talks between the county and officials at the Pentagon and Kings Bay have largely allayed those concerns.

The global commercial space industry is estimated at more than $350 billion, with much attention focused on low-Earth orbit, the area spanning 100 to 1,240 miles above the planet’s surface. And the Georgia site continues to attract interest. Opifex Global, a provider of aerospace training services, recently announced a memorandum of understanding (MOU) with Camden County to explore commercial astronaut training facilities near the proposed spaceport.

What’s more, Alaska Aerospace Corp., owner and operator of FAA-licensed Pacific Spaceport Complex Alaska (PSCA), has entered into an MOU with the county to support launch vehicle operator needs. The partnership takes advantage of each location’s geographical position. PSCA, based in Kodiak, Alaska, is ideal for polar and sun-synchronous orbits, while Camden is well suited for lower-inclination and equatorial orbits.

Breaking the logjam at FAA may require intervention by the White House. One way to get at the FAA’s insistence on a revised EIS is through President Donald Trump’s June 4 Executive Order. It instructed federal agencies to expedite the permitting process for construction and energy projects as a means to confront the economic emergency brought on by COVID-19-related lockdowns.

Separately, the Trump administration in January proposed new regulations speeding up the notoriously slow EIS-approval process. The White House might be persuaded that FAA’s mandating another lengthy EIS for a launcher class that is 80–90 percent smaller than the original evaluated and acceptable launcher class would further unnecessarily delay the spaceport and undermine southeast Georgia’s economic recovery.

Bonner R. Cohen is a senior fellow at the National Center for Public Policy Research, where he concentrates on energy, natural resources, and international relations.

Bonner R. Cohen
Bonner R. Cohen is a senior fellow at the National Center for Public Policy Research, where he concentrates on energy, natural resources, and international relations.