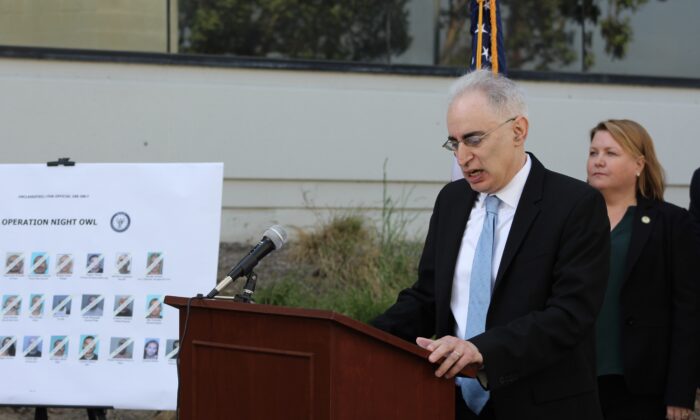 SANTA ANA, Calif.—Federal and local authorities announced on April 27 that three leaders of the Orange County Mexican Mafia—as well as 28 of their associates—have been charged with racketeering, murder, and trafficking drugs and guns.

“The indictment reflects a sustained team effort to bring people who terrorize our communities to justice for their years of violence and narcotics trafficking in Southern California and beyond,”  David Jaffe, Chief of the Organized Crime and Gang Section of the United States Department of Justice, said in a news conference.

The indictment is for the criminal organization known as La Eme, a “gang of gangs,” Jaffe said.

The Mexican Mafia traffics narcotics, methamphetamine, and heroin in and out of prison jails using sophisticated forms of communication through smuggled phones, codes, or visits from female associates known as “secretaries,” officials said.

Of those charged in the indictment, 21 were already in custody, and nine were arrested over the last 24 hours, authorities said.

“No gang member is beyond our reach,” U.S. Attorney Tracy L. Wilkison said. “Working together, law enforcement intends to dismantle street gangs and prison gangs from top to bottom, from shot caller to street soldier.”

Wilkison said if convicted, each defendant will face a lengthy prison sentence in federal prisons “far from Orange County where it’ll be much more difficult, if not impossible, to exert their power.”