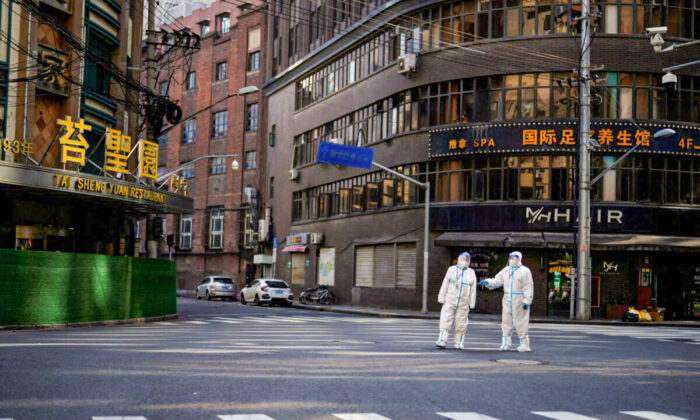 Workers in protective suits keep watch on a street during a lockdown amid the COVID-19 pandemic, in Shanghai, on April 16, 2022. (Aly Song/Reuters)
China Business & Economy

HONG KONG—Finance sector professionals in Shanghai are preparing to move back to Hong Kong and other offshore centers after spending only a few years in the Chinese city as a harsh COVID-19 lockdown has hurt their business prospects and upended daily lives.

Thousands of bankers, traders, and investors in the financial hub of the world’s second-largest economy have found themselves confined to their homes, with some even struggling to secure food and other essentials for their families.

The four-week-long lockdown, which has forced most of the city’s 26 million people indoors, has started to weigh on prospective financial deals with some transactions being put on hold due to logistical challenges, industry executives said.

“What happened in Shanghai is shocking to most of the people. Few would have imagined things will get out of hand to such an extent,” said Melvyn Xu, a private equity investor who moved to Shanghai from Hong Kong in late 2020.

Xu is now waiting for cross-border movement restrictions to be relaxed so that travel becomes easier between the mainland and Hong Kong, and is considering sending his children back to local schools in Hong Kong, while paring his ties to Shanghai “as a ground for work only.”

“I think the biggest frustration is you cannot do anything about it [lockdown], which is particularly upsetting,” he said. “For people living here, you’ve got utterly zero bargaining power.”

An exodus will hurt Shanghai’s ambition to be a regional financial center and bring bad news for foreign investment banks, insurers, and asset and wealth managers who have been expanding their footprints in the city over the past few years.

Goldman Sachs is looking to add close to 10 jobs in Shanghai, a WeChat post showed. JPMorgan is beefing up its Shanghai unit after taking full ownership last year, while BlackRock is adding around 20 to its headcount in its Shanghai fund unit.

The industry’s growth moves resulted in many bankers, traders, and fund managers moving from Hong Kong and other centers to Shanghai to be closer to their clients and gain expertise in working in new areas and on large transactions.

Those dreams now appear to be in peril.

“Once this lockdown is over, expats across all industries will negotiate a new career outside of China,” said Jason Tan, Shanghai-based director specializing in wealth, buyside, and fintech at headhunter REForce group.

Conversations with financial professionals in Shanghai have shown deep concerns about the lockdown measures, Tan said. “[It’s] not very attractive moving forward … This lockdown can happen again. Next time it might be longer and tighter.”

Work-wise, the biggest challenge for bankers in Shanghai is that they cannot conduct on-site due-diligence on their clients that are planning to go public or exploring M&A opportunities.

“We have to go to their factories, plants to verify things. It’s impossible to get the due-diligence done virtually,” said a senior investment banker with a European bank, who has been working in Shanghai on a temporary basis since February.

A senior portfolio manager based in Shanghai said that the lockdown has “profoundly, at least in the short term” changed the business environment of the city.

“Shanghai is a financial and industrial center of China which operates like a machine” but almost no adjustments have been introduced to maintain its operation even after citizens posted complaints on social media, said the portfolio manager.

Both the investment banker and the portfolio manager declined to be named due to the sensitivity of the issue.