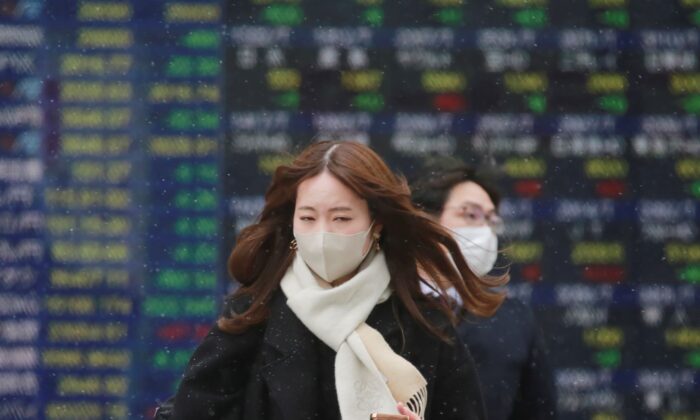 People walk by an electronic stock board of a securities firm in Tokyo, on Jan. 6, 2022. (Koji Sasahara/AP Photo)
Stocks

LONDON—Stock markets were deep in the red and some key government bond yields climbed to their highest in years on Thursday after the Federal Reserve signaled the possibility of faster-than-expected U.S. rate hikes and stimulus withdrawal.

Minutes from the Fed’s December meeting had shown that a tight jobs market and unrelenting inflation could require the U.S. central bank to raise rates sooner than expected and begin reducing its overall asset holdings—a process known as quantitative tightening (QT).

Early European trading saw the STOXX 600 share index lose 1.3 percent, erasing all of its gains for the year that had sent it to record highs.

“Some people are quite spooked by the minutes from the Fed that they could be tightening faster,” said Carlos de Sousa, an emerging markets strategist, and portfolio manager at Vontobel Asset Management.

“Maybe the market is overreacting a bit, though. The fact they are discussing this (quantitative tightening) doesn’t mean they are going to do it,” he said, adding that he expected 1–3 rate hikes in 2022 but would be surprised if QT did happen this year.

The minutes showed that Fed officials were uniformly concerned about the pace of inflation, which promised to persist, alongside global supply bottlenecks, “well into” 2022.

The Nasdaq’s 3 percent drop on Wednesday was its biggest one-day percentage decline since last February and the S&P 500 fell the most since Nov. 26, when news of the Omicron variant first hit global markets.

“There is a risk that the Fed might fall into the trap of making policy errors because they do have to perhaps hike interest rates faster than expected, but given the timing of their exit from quantitative easing, it could coincide with a slowdown in the economic cycle and also a decline in inflation on base effects,” said Casanova.

European trading saw U.S. Treasury yields continue to push higher across the curve. The U.S. 10-year yield hit its highest level since April 2021 on Thursday above 1.73 percent and was last at 1.732 percent, from a close of 1.703 percent on Wednesday.

In Europe too, 10-year Germany Bund yields, which rolled over into a new benchmark, rose to -0.05 percent, the highest level since May 2019, Refinitiv data showed.

Analysts said that while the rollover into a new contract made the move in Bund yields appear large, even if measured on a continuous basis, yields were at new multi-month highs.

Higher U.S. yields continued to support a firm dollar, though the currency gave back some ground against the yen after touching five-year highs earlier this week, falling 0.21 percent to 115.86.

In commodity markets, global benchmark Brent crude steadied at $79.14 per barrel and U.S. crude dipped to $80.08 a barrel after OPEC+ producers agreed to boost production and on a surge in U.S. stockpiles.

Spot gold was down 0.8 percent at $1,794 per ounce, with higher U.S. bond yields dulling the lustre of the precious metal.