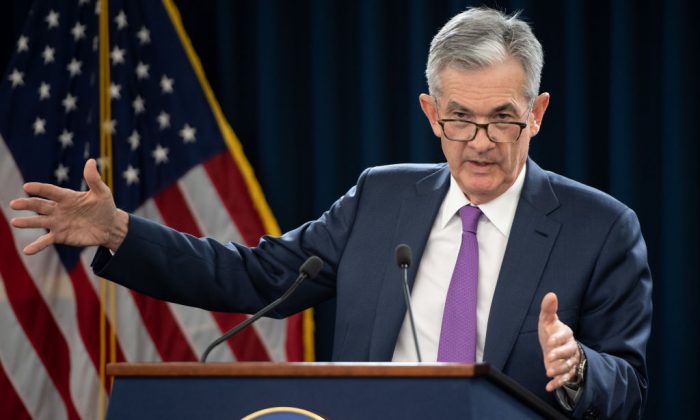 “Information received since the Federal Open Market Committee met in September indicates that the labor market has continued to strengthen and that economic activity has been rising at a strong rate,” the Fed’s policy statement said.

The Fed decided to keep the benchmark rate at 2 to 2.25 percent at its two-day meeting that concluded Nov. 8.

According to the statement, the central bank “expects that further gradual increases in the target range for the federal funds rate will be consistent with sustained expansion of economic activity, strong labor market conditions, and inflation near the Committee’s symmetric 2 percent objective over the medium term.”

The Fed also acknowledged that business investment is slowing.

“Household spending has continued to grow strongly, while the growth of business fixed investment has moderated from its rapid pace earlier in the year,” the statement said.

The U.S. economy expanded at a 3.5 percent annual rate in the third quarter, because of strong consumer spending. While the growth came in lower than the 4.2 percent pace in the second quarter, it still marked the strongest back-to-back quarters of growth since 2014.

Consumer spending—which accounts for almost 70 percent of the economy—recorded a 4 percent increase in the third quarter. Business spending, however, was a weak spot, decelerating to 0.8 percent following the strong 10.1 percent pace in the first half of the year.

While business spending varies substantially quarter over quarter, the unexpected slowdown was considered as a sign of the fading impact of fiscal stimulus.

The Fed, in its policy statement, described labor market conditions as “strong.”

“In determining the timing and size of future adjustments to the target range for the federal funds rate, the Committee will assess realized and expected economic conditions relative to its maximum employment objective and its symmetric 2 percent inflation objective,” the statement said.

The Fed also reiterated that this assessment would take into account a wide range of information including “readings on financial and international developments.”

“As expected, the statement did not change the language on financial developments,” stated a Goldman Sachs report. “We increased the subjective odds of a December hike to 95 percent from 90 percent previously.”

U.S. stocks traded lower after the Fed’s announcement. Higher rates mean an increased cost of borrowing for consumers and corporations, which, in turn, lead to lower profits and a weaker economy.

“Every time we do something great, he raises the interest rates,” he said.

When asked about what is the biggest risk to the economy, Trump answered: the Fed.

“To me, the Fed is the biggest risk, because I think interest rates are being raised too quickly.”

Fed officials increased the benchmark rate by 25 basis points in September. It was the third increase this year and the eighth since December 2015, when the Fed began inching rates up from effectively zero percent. The Fed projects one more rate boost in December and three in 2019.

When asked at a Washington Post event on Nov. 1 whether the president has ever called Powell to personally ask for lower interest rates, he replied: “Not yet.”

Kudlow also said that Trump had no intention of replacing the Fed chairman.

“The Fed and the administration have similar goals—that is to say noninflationary growth,” Kudlow said. “I think that over time that will become more and more apparent.”