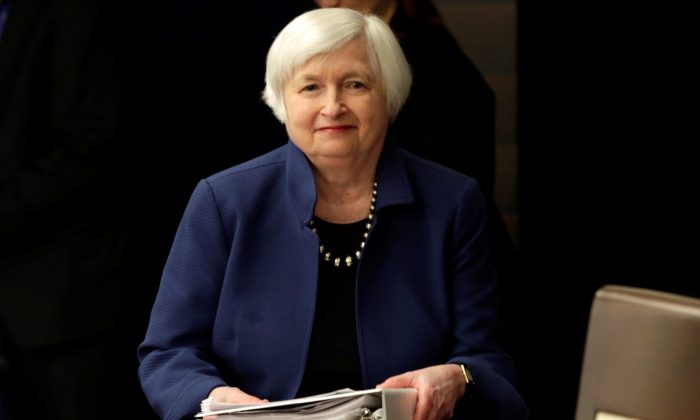 The decision to lift the target overnight interest rate by 25 basis points to a range of 0.75 percent to 1.00 percent marked one of the Fed’s most convincing steps yet in the effort to return monetary policy to a more normal footing.

However, the Fed’s policy-setting committee did not flag any plan to accelerate the pace of monetary tightening. Although inflation is “close” to the Fed’s 2 percent target, it noted that goal was “symmetric,” indicating a possible willingness to allow prices to rise at a slightly faster pace.

Further rate increases would only be “gradual,” the Fed said in its policy statement, with officials sticking to their outlook for two more rate hikes this year and three more in 2018. The Fed lifted rates once in 2016.

Business investment “appears to have firmed somewhat,” the Fed said in language that reflected a stronger sense of the economy’s momentum.

Fresh economic forecasts released with the statement showed little change from those of the December policy meeting and gave little indication the Fed has a clear view of how the policies of Donald Trump’s administration may impact the economy in 2017 and beyond.

“With gradual adjustments in the stance of monetary policy, economic activity will expand at a moderate pace,” the Fed said, maintaining language it has used in previous statements.

Stock markets extended their gains and bond yields fell on the benign economic outlook and the continued steady path of interest rate rises signaled by the central bank.

“It relieves some of the fears we’ve had that perhaps the Fed was going to raise rates faster in the future. They’ve chosen not to signal that,” said Brad McMillan, Chief Investment Officer at Commonwealth Financial.

The Fed’s projections showed the economy growing by 2.1 percent in 2017, unchanged from the December forecast. The median estimate of the long-run interest rate, where monetary policy would be judged as having a neutral effect on the economy, held steady at 3.0 percent.

The unemployment rate Fed officials expect by the end of the year was unchanged at 4.5 percent, while core inflation was seen as slightly higher at 1.9 percent versus the previous 1.8 percent forecast.

Fed Chair Janet Yellen is scheduled to hold a press conference at 2:30 p.m. ET to discuss the policy statement.

The rate increase comes amid a broad improvement in the world economic outlook and a sense among Fed policymakers that the U.S. economy is close to the central bank’s employment and inflation goals.

According to the policy statement, risks to the outlook remained “roughly balanced,” the Fed said.

Minneapolis Fed President Neel Kashkari was the only official to dissent in Wednesday’s decision, saying he preferred to leave rates unchanged.