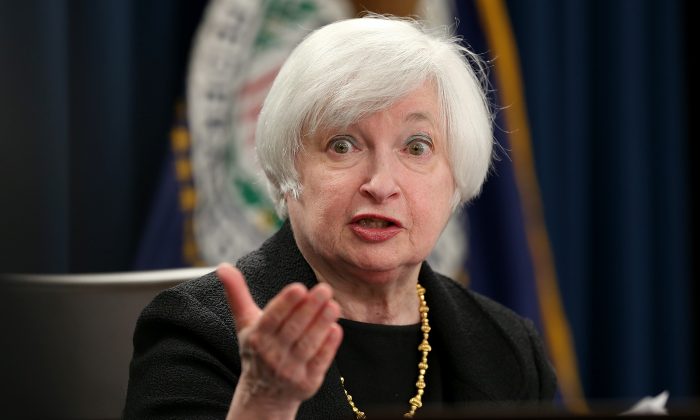 The Fed reminded financial markets that a rate hike in December is very much a possibility. In a hawkish statement, the Fed gave a signal that it is far less worried about international developments—mainly China. It is also appears to be giving less weight to some recent weaker economic data.

The key change to the Federal Open Market Committee (FOMC) statement released Oct. 28 is the insertion of “at its next meeting” after the phrase “In determining whether it will be appropriate to raise the target range.” The Fed seemed to be putting particular focus on the December meeting.

The October meeting was thus largely about what the Fed will do in December as a rate hike was not expected on Oct. 28.

The Fed does not want to surprise financial markets after having spent most of 2015 wanting to raise rates and not doing so.

The Fed statement upgraded household spending and business fixed investment saying they went up “at solid rates in recent months” as opposed to only “moderately” in September.

The Fed feels the development in inflation is a touch more positive than in September, characterizing it as moving “slightly lower” as opposed to “lower.”

We see little reason for the FOMC to delay the first rate hike until 2016.
— RBC

Back in September, some market participants felt the Fed was overreacting to the convulsions in financial markets of August mainly due to China’s slowing growth, but since then, volatility has calmed down and stock markets have rallied.

While the international story doesn’t look as bad, U.S. economic data have generally been so-so since the Fed last met on Sept. 17. The jobs report disappointed (142K non-farm payrolls for September) as did retail sales, manufacturing, and durable goods orders recently.

Thus, U.S. growth in the third quarter is projected to be much slower than the 3.9 percent seen in the second quarter. A CNBC/Moody’s Analytics Survey forecasts it at 1.7 percent.

Just last week the Bank of Canada gave a positive review of the U.S. economy in its monetary policy report.

The BoC and Fed are both bullish on U.S. business investment. Canada’s central bank’s statement noted the “particular strength in private domestic demand, which is important for Canadian exports.”

September’s dot plot showed 13 of 17 FOMC members thinking appropriate monetary policy would include at least one rate hike for 2015. The Fed’s credibility will continue to be under serious scrutiny if no rate hike takes place in 2015 after the changes made in the October statement and provided economic data doesn’t fall off a cliff.

“With market volatility having normalized and job growth continuing at a pace that will reduce labour market slack, we see little reason for the FOMC to delay the first rate hike until 2016,” wrote RBC in a note.

“Barring any significant deterioration in the growth outlook or the return of market volatility, we expect the target range for the fed funds rate will be raised by 25bp [0.25 percent] on December 16th.”

Financial markets initially reacted to the hawkish statement with U.S. equities wiping out gains from earlier in the day before rallying strongly. The two-year bond yield moved higher by 0.07 percent. The dollar index reached a two-month high to over 97.50.

The next Fed policy meeting will be held December 15 and 16.