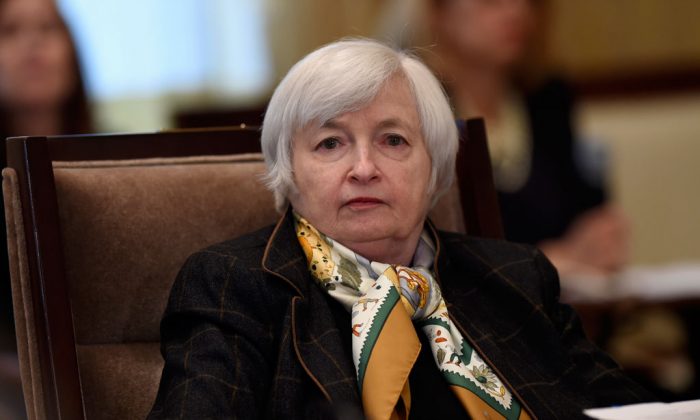 WASHINGTON—Federal regulators are proposing that the eight biggest U.S. banks be required to further increase the amount of capital they set aside to cushion against unexpected losses.

The Federal Reserve’s proposal is aimed at reducing the potential for future taxpayer bailouts of troubled banks. The proposed requirements also are designed to encourage the behemoths to shrink so they pose less risk to the financial system. The banks include JPMorgan Chase, Citigroup and Bank of America.

The Fed governors are voting at a meeting Tuesday to advance the so-called “capital surcharges.” They would increase in proportion to how risky the regulators deem a bank to be. A key risk factor would be how much a bank relies on short-term funding markets to borrow from other banks. Those markets seized up during the financial crisis.

The requirements would give the banks an incentive to shed businesses and downsize to avoid having to set aside more capital.

The requirements would be phased in from 2016 through 2018. Fed officials said nearly all eightbanks already meet the stricter capital requirements, and that all of them are “on their way” to meeting them by the Jan. 1, 2019 deadline for full implementation.

The eight banks, considered so big and interconnected that each could threaten the financial system if they collapsed, also include Goldman Sachs, Wells Fargo, Morgan Stanley, Bank of New York Mellon and State Street Bank.

The stricter requirements “would encourage such firms to reduce their systemic footprint and lessen the threat that their failure could pose to overall financial stability,” Fed Chair Janet Yellen said at the meeting.

The importance of banks’ reliance on short-term funding markets as a risk factor could mean larger required capital increases for investment banks in the group like Goldman Sachs and Morgan Stanley. Investment banks tend to use the wholesale funding markets more than commercial banks, which tend to rely more on deposits.

Stricter capital requirements for banks were mandated by Congress after the financial crisis, which struck in 2008 and ignited the worst economic downturn since the Great Depression. Hundreds ofU.S. banks received taxpayer bailouts during the crisis, including the eight Wall Street mega-banks that would be subject to the additional layer of capital requirements under theFed’s proposal.

In recent years, the Fed and other regulators have put into effect a series of rules for banks to increase their capital buffers, as required by the 2010 financial overhaul law. The new additional layer of requirements for the biggest banks would also exceed the levels mandated by international regulators.

“There is a fair amount of apprehension” among the banks as to how steep the new requirements will be in the proposal, Nancy Bush, a banking analyst at NAB Research, said Tuesday morning before the Fed governors’ meeting. She said the banks can probably “live with” the requirements so long as they are the last of “this endless fiddling with capital” by the regulators.

Banking industry groups say the Fed requirements could limit access to loans for businesses and consumers, by reducing the amounts that banks would have available to lend.

In a related move this fall, federal regulators required all large U.S. banks to keep enough high-quality assets on hand to survive during a severe downturn. The rules subject the banks for the first time to so-called “liquidity” requirements, replacing voluntary standards. Liquidity is the ability to access cash quickly.