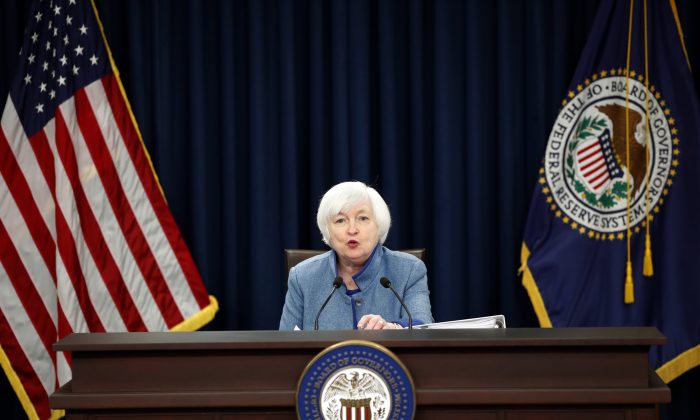 Federal Reserve Chair Janet Yellen speaks during a news conference on Dec. 14, 2016 in Washington. The Fed raised its key policy rate for the second time in a decade. (AP Photo/Alex Brandon)
Business & Economy

With the Federal Reserve raising rates for the second time in a decade on Dec. 14, its economic projections and future rate hikes carry less weight than usual given the uncertainty surrounding the Trump administration’s fiscal policy.

The Fed’s December rate hike was universally expected; however, its chair, Janet Yellen, was categorical during her news conference that the U.S. central bank is “operating under a cloud of uncertainty at the moment” regarding impacts of the new government’s potential fiscal measures on the economy.

In contrast, stock markets have been setting record highs since the election, reflecting higher growth prospects and business optimism, while bonds have been routed due to a rise in inflation expectations. The S&P 500 is up 5.3 percent and the U.S. 10-year Treasury bond yield is up 0.72 percent since Nov. 8.

I do not judge that we are ‘behind the curve.’
— Janet Yellen

Yellen said some Federal Open Market Committee (FOMC) participants incorporated changes in fiscal policy in their projections; however, the differences from September’s projections are minimal, especially when juxtaposed to the reactions in financial markets.

BMO Capital Markets Chief Economist Doug Porter told Epoch Times that the December “dot plot” is less meaningful. “You have to take it with a grain of salt,” he said in a phone interview.

The dot plot—year-end projections for the Fed’s key rate—seems like a “mixed bag” given the different assumptions various FOMC members used in determining their forecasts, according to Porter.

BMO raised its U.S. growth forecast to 2.4 percent in 2017 and to 2.5 percent in 2018. The forecasts, up on average 0.4 percent, are subject to revision until more clarity is available on fiscal policy.

TD estimates that a US$500 billion deficit in 2017 would add about 0.8 percent to growth and would imply from one to three additional rate hikes over what the Fed expected in September.

“I do not judge that we are ‘behind the curve,'” Yellen said with respect to growth and inflation potentially coming in higher than the Fed’s projections and necessitating additional rate hikes to cool the economy.

The Fed’s growth projections hover around 2.0 percent and fall to 1.8 percent in the longer run—clearly not incorporating any uptick from tax cuts, infrastructure spending, or reduced regulation, whose details are unknown.

The central bank typically doesn’t opine on fiscal policy, though Yellen said government spending is not needed for the economy to reach full employment. Unemployment in the United States stands at 4.6 percent, the lowest since August 2007.

FOMC projections show unemployment dipping to 4.5 percent between 2017 and 2019 before rising to 4.8 percent in the longer term. The improving labour market will help inflation rise to its 2.0 percent target over the projection horizon.

“It’s quite possible we’re looking at more of a 2018 story from stimulus rather than 2017,” Porter said, given that it probably will take time to hammer out a government spending package that’s agreed upon by all sides, not to mention the time it takes for fiscal policy to impact growth, employment, and inflation.

“They [the Fed] won’t act proactively on that front,” Porter said. “They’ll definitely wait and see what actually gets done.”

Yellen suggested implementing measures to spur productivity growth as one of the bases for ramping up fiscal spending. But she cautioned that there are considerations for Congress such as the aging population and a projected rise in the ratio of debt to gross domestic product. Productivity fell sharply during the financial crisis and has been a permanent hit to the economy’s growth potential.

The Fed’s next set of projections and dot plot will be published in March 2017. Assuming greater clarity on the Trump administration’s fiscal policy, financial markets can have greater confidence in the Fed’s economic projections and expectations of future rate increases.