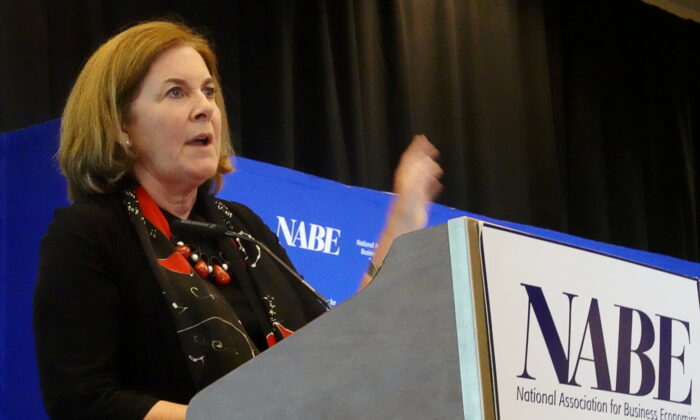 Fed Official Hits Hawkish Note on Inflation, Says It Is ‘Very Broad-Based’ and ‘More Work to Be Done’

Despite calls for a tighter monetary policy to fight high inflation, Federal Reserve policymakers have yet to commit to the size of the next rate increase at its policy meeting in September, said Esther George, president of the Federal Reserve Bank of Kansas City.

It also remains far from clear whether the easing of U.S. inflation rates in July is the start of a downward trend, according to George during an interview with CNBC on Aug. 25, at the start of the Fed’s summer conference in Jackson Hole, Wyoming.

The U.S. Consumer Prices Index (CPI) showed the pace of inflation rose 8.5 percent in the 12 months through July, down from a 9.1 percent rate in June.

“We still have high inflation. We saw some easing in the July numbers, but I think it remains broad-based, so there’s more work to be done,” George said to CNBC.

She also admits that unemployment will probably rise when the central bank raises the interest rates to its intended target of 2 percent inflation.

Raphael Bostic, president of the Federal Reserve Bank of Atlanta, told Bloomberg that he had not decided whether to back a 50 or 75 basis-point increase at the next meeting of the Federal Open Market Committee on Sept. 20–21.

He called the policy rate decision effectively a coin toss at this point, during a separate interview with The Wall Street Journal.

“We all, as policymakers, understand that inflation is a big problem and is a challenge that we’re going to do all that we can to handle,” said Bostic to The Journal.

The Fed has pushed its benchmark rate to a range of 2.25–2.5 percent since March, while the latest meetings in June and July saw two consecutive 75 basis-point hikes, the largest increase in decades.

While speaking to Bloomberg, George said that the Fed has not yet raised interest rates to a level that would have an effect on inflation levels and that rates may have to rise above 4 percent or even 5 percent for a time to get the desired results, believing that the economy was “still sorting itself out.”

James Bullard, president of the Federal Reserve Bank of St. Louis, told Fox News that the central bank wanted to see its benchmark federal funds rate “reach a point where inflation begins to meaningfully decelerate” and that policymakers would need at least three consistent months to see good results in order to observe a convincing trend.

George also said they will have more inflation and jobs data before the central bank’s meeting in September and that officials at the Fed will analyze government reports on consumer prices and employment between now and then.

The Fed relies more on the Personal Consumption Expenditures (PCE) over the CPI, which rose 6.8 percent at the start of the year through June.

The Fed’s Next Step

Fed Chairman Jerome Powell is expected to give a speech at Jackson Hole on Aug. 26, and will likely repeat his intention to keep tightening monetary policy rates to fight 40-year high inflation.

Many economists have demanded that the Fed increase rates to fight inflation, while others said that increasing it too fast might crash the economy, and that a clearer statement on its policy rate was needed to reassure the markets.

Former Treasury Secretary Lawrence Summers said to Bloomberg that the leadership at the Fed was causing confusion among investors by avoiding a clear declaration on its future policy rate stance, or “further damage” will be done to its credibility.

Investors are debating whether the Fed will go for another 75 basis-point rate hike in September, as it did in June and July, or go for a lesser half-percentage-point increase.

Summers also said that Powell needs to be more honest about the fact that a tightened economic policy will likely result in job losses.

George refused to get involved in the debate over the size of the expected interest-rate hike in September.

“We’ve seen some cooling beginning. I think we’re going to have to see something more broad-based to begin to know that inflation is coming off its highs,” said George on CNBC’s SquawkBox.

“Our charge is pretty clear, and that is to bring inflation back to our target.”

George said to CNBC that she did not see many signs of a potential recession in her St. Louis Fed district.

She also said that it was important for investors to realize that the full effect of the Fed’s policies have yet to be felt on the economy and that the central bank is still allowing its balance sheet to shrink.

“We want financial conditions to tighten along with the direction we are moving around policy,” she said to Bloomberg.