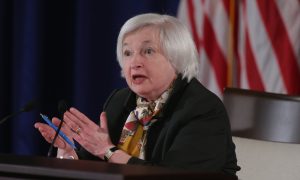 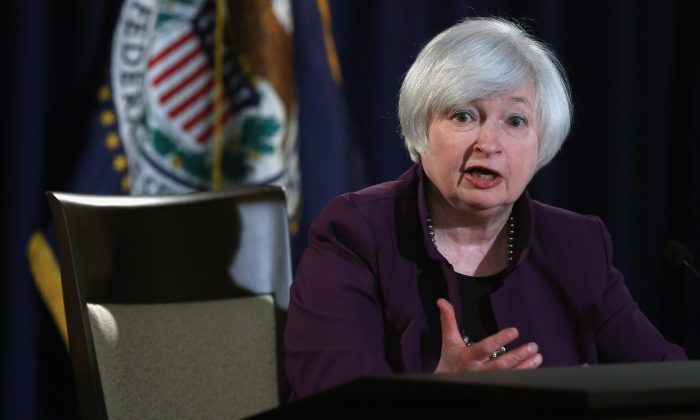 Fed chair Janet Yellen stressed not focusing on when the first rate hike takes place, but rather the trajectory of rates in her press conference on June 17, 2015 in Washington, DC. (Chip Somodevilla/Getty Images)
Business

The Fed has seen some progress in the U.S. economy, but wants to see some more before raising the Fed funds rate target. It held rates unchanged on Wednesday, June 17, while continuing to hint strongly at a rate hike in 2015.

In its statement, the Federal Open Market Committee (FOMC) outlined that it’s seeing a rebound in the U.S. economy after a disappointing first quarter. The pace of job gains has picked up, but inflation continues to run below the 2 percent target.

“Economic activity has been expanding moderately after having changed little during the first quarter,” read the FOMC statement.

Fed chair Janet Yellen sang a familiar refrain that the first rate hike will be appropriate once the FOMC feels reasonably confident that inflation will move back to its 2 percent target over the medium term and when it has seen the labour market getting stronger.

Published along with the FOMC statement was a new set of economic projections and the increasingly important “dot plot” showing FOMC members’ individual projections for the year-end Fed funds rates. Of the 17 FOMC members, 15 feel rates should rise starting in 2015. This is unchanged from March’s projections, but adds a sense of urgency given that 2015 is almost half over now.

Economic activity has been expanding moderately after having changed little during the first quarter.
— Federal Open Market Committee

At her press conference, Yellen cautioned that there is too much focus on the timing of the first rate hike and that what should matter is the entire trajectory of the Fed funds rate. Monetary policy will be “highly accommodative for quite some time after the initial rate hike,” Yellen said.

Yellen did mention in a May 22 speech that the Fed would start hiking rates “at some point this year.”

According to a June Bloomberg survey, the vast majority of economists polled (51 out of 65) expect the Fed to raise rates in September. The FOMC meets again in late July before a highly anticipated mid-September meeting in which the Fed rates could hike for the first time since 2006.

As a result the dot plot has continued to show a slowing rise in the Fed funds rate as compared to recent prior meetings.

The disappointing first quarter, affected by a very harsh winter, brought down growth projections for 2015 as compared to March’s projections. The central tendency for real GDP growth in 2015, which excludes the three highest and three lowest FOMC members’ projections, ranges from 1.8 to 2.0 percent—a notable 0.5 to 0.7 percent lower than the projections in March.

The Bank of Canada stated in its May 27 interest rate decision that it “expects a return to solid growth in the second quarter” for the U.S. economy. In its April Monetary Policy Report, the BoC’s projection for 2015 growth in the U.S. was 2.7 percent, and for 2016 it was 3.0 percent.

Fed Downgrades Assessment of US Economy

Fed No Longer Patient on Rate Hikes, Downgrades Economy
Growth in Canada’s non-energy exports sector is one area where the BoC feels confident an improvement is happening, and the strengthening U.S. economy is critical for that to continue.

Oil prices appear to have found some stability of late, with West Texas Intermediate hovering near US$60 for about two months now, but Yellen noted that inflation is likely to run at a low level for a substantial period of time. The lower oil prices and a stronger dollar dampening import prices are factors that are expected to dissipate. Those “transitory” factors were particularly acute in a disappointing first quarter for the U.S. economy.

The benchmark Fed funds rate has been kept near zero since December 2008. Back in March, the Fed kept the possibility of a June rate hike on the table, but with the U.S. economy contracting 0.7 percent in the first quarter and mixed economic data since then, a rate hike was deemed very unlikely at this time.

The Canadian dollar gained slightly after the release of the Fed statement as the dollar index weakened. Stock markets moved higher, while bond yields moved a touch lower in reaction.