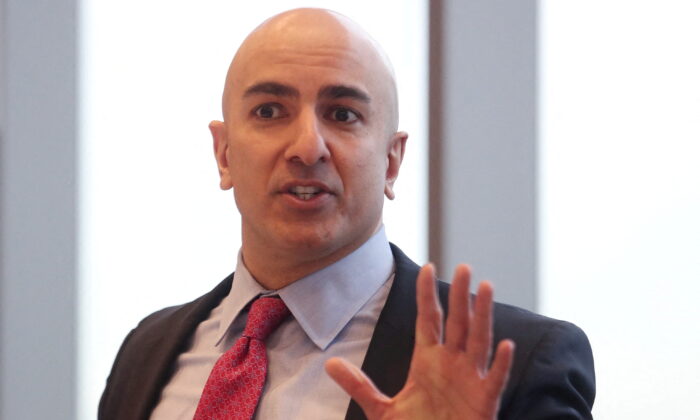 President of the Federal Reserve Bank of Minneapolis Neel Kashkari speaks during an interview in New York, on March 29, 2019. (Shannon Stapleton/Reuters)
Economic Policies

Fed Is ‘Far, Far Away’ From Declaring Win on Inflation Despite White House Victory Lap: Kashkari

The president of the Federal Reserve Bank of Minneapolis has said that the Central Bank is “far, far away from declaring victory” on inflation, despite the Biden administration praising “zero percent” inflation in July, which prompted some confusion.

Neel Kashkari told Reuters on Aug. 10 that he believes the U.S. central bank will need to raise its policy rate another 1.5 percentage points in 2022 and more in 2023, even if doing so prompts an economic downturn in the “near future,” noting that “We have to get back to 2 percent inflation.”

The Fed is “far, far away from declaring victory” on inflation, Kashkari noted, although he welcomed July’s consumer price index (CPI) report, which showed the U.S. annual inflation declined in July from 9.1 percent in June.

According to the Bureau of Labor Statistics, the Consumer Price Index showed that inflation was at 8.5 percent in July 2022. Experts had predicted a reading of 8.7 percent.

Meanwhile, the core inflation rate, which excludes the volatile food and energy sectors, remained unchanged at 5.9 percent last month and reported a smaller monthly increase of 0.3 percent compared with June.

The data prompted President Joe Biden to declare that the U.S. economy had “zero percent” inflation in July, which sparked controversy, particularly among experts and Republican lawmakers.

“Before I begin today, I want to say a word about the news that came out today relative to the economy. Actually, I just want to say a number: Zero,” Biden said during an address from the White House on Wednesday.

“Today we received news that our economy had zero percent inflation in the month of July,” he added.

“The Biden Administration has a tortured relationship with math,” Rep. Virginia Foxx (R-N.C.) wrote on Twitter.

Elsewhere, Sen. Rick Scott (R-Fla.) wrote on Twitter: “While Joe Biden lies, Americans are still paying for his incompetence. 1. Inflation (CPI-U) in July was unchanged from June meaning it was JUST AS BAD…not zero. 2. Over the year, inflation (CPI) was still UP 8.5 percent. Horrifically bad.”

Despite the backlash, White House press secretary Karine Jean-Pierre also reiterated Biden’s comments regarding inflation via her official Twitter account, writing: “We just received news that our economy had 0 percent inflation in July. While the price of some things went up, the price of others, like gas, clothing, and more, dropped.”

Jean-Pierre went on to say that the current decline in gas prices “is the fastest in a decade – saving American families with two cars $106 per month on average.”

The national average price of gasoline is $3.990 as of Aug. 8, according to data from AAA;  much lower than the $5 per gallon price it reached in June but still far off the $3.185 it cost this time last year as the Covid pandemic, increased demand and Russia’s war in Ukraine have all driven up prices.

As inflation continues to impact American households, all eyes are now on the Federal Reserve’s next policy meeting in September.

Kashkari told Reuters on Wednesday that market expectations for rate cuts to begin early next year are “not realistic” and would likely not happen “until we get convinced that inflation is well on its way” to the Fed’s goal of 2 percent.