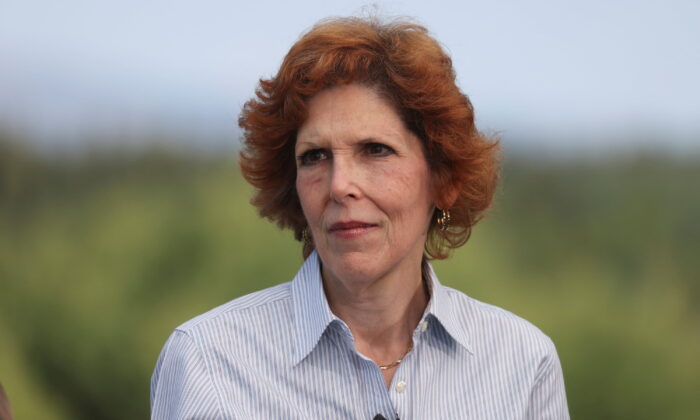 Loretta J. Mester, president of the Federal Reserve Bank of Cleveland, looks on at Teton National Park, where financial leaders from around the world gathered for the Jackson Hole Economic Symposium outside Jackson, Wyoming, on Aug. 26, 2022. (REUTERS/Jim Urquhart)
Business & Markets

Fed Determined to Crush Inflation Even If Recession Deepens and Unemployment Rises: Mester

Investors are worried that the Federal Reserve’s aggressive fight against inflation might sink markets deeper and tank the economy further. They also were given little reason to expect relief anytime soon, as Loretta Mester, president of the Federal Reserve Bank of Cleveland, said on Aug. 31 that the central bank is determined to keep hiking rates and keep them high even if it means a sharper slowdown and higher unemployment.

“My current view is that it will be necessary to move the fed funds rate up to somewhat above 4 percent by early next year and hold it there. I do not anticipate the Fed cutting the fed funds rate target next year,” Mester said in prepared remarks to a local chamber of commerce in Dayton, Ohio.

An embarrassed Fed found itself behind the curve on the inflation fight after initially downplaying jumping prices as “transitory,” and so the central bank embarked on a swift tightening cycle, delivering a series of interest-rate hikes that have pushed its policy rate into the range of 2.25–2.5 percent.

“More Work to Do”

While far higher than the near-zero interest-rate levels of the pandemic era—and its unprecedented levels of monetary and fiscal stimulus that sent stocks and other risk assets soaring—rates at the current range remain accommodative, Mester said. This means that at current levels, the Fed’s monetary policy continues to stoke prices.

“In the current high-inflation environment, a 2.5 percent nominal funds rate is still accommodative and the Fed has more work to do,” she said.

Economists generally consider a fed funds rate that is 0.5 percentage points above the longer-run inflation rate to be the so-called “neutral rate.” That’s when monetary policy is neither restrictive nor stimulative—neither adding to price pressures nor relieving them.

If inflation is at 2 percent—the Fed’s target—then 2.5 percent would be neutral, the logic goes.

“When you think of 2.5 percent, that’s the longer-run neutral rate of interest, but right now, inflation is high,” Mary Daly, president of the Federal Reserve Bank of San Francisco, told Reuters in early August.

“And there’s a lot of demand chasing limited supply, and so of course the neutral rate is elevated. So my own estimate of where that would be right now is around or a little bit over 3 percent, maybe 3.1 percent,” Daly added.

Fed Chair Jerome Powell raised eyebrows recently when he declared at a press conference on July 27 that the fed funds rate was roughly at neutral after the rate-setting Federal Open Market Committee voted to hike rates by 75 basis points, to the range of 2.25–2.5 percent.

“There is no conceivable way that a 2.5 percent interest rate, in an economy inflating like this, is anywhere near neutral,” former Treasury Secretary Larry Summers told Bloomberg TV at the time, calling Powell’s remarks on the neutral rate “analytically indefensible.”

When Powell made the “neutral” rate remark in July, the Fed’s preferred inflation gauge was running at 4.6 percent. By the common definition, this would have put the neutral rate 50 basis points higher, at 5.1 percent—a far cry from the fed funds’ upper bound of 2.5 percent.

In what may be seen as a tip of the hat to her boss, Mester explained in her remarks on Aug. 31 that 2.5 percent would indeed be neutral, assuming inflation eventually drops back down to the Fed’s 2 percent target in the long run.

“The current level of the fed funds rate is near the range of estimates of its longer-run nominal level, and when inflation is at 2 percent and inflation expectations are consistent with 2 percent inflation, this longer-run level would be neutral in the sense of neither stimulating nor restraining economic activity,” she said.

Two common gauges of long-run inflation—the five-year and 10-year breakeven inflation rates— are running at 2.67 percent and 2.55 percent, respectively. Based on these baselines, the neutral rate would be 3.17 percent or 3.05 percent.

“Bumps Along the Road”

Mester noted that price pressures have eased somewhat recently, though this mostly reflected a sharp drop in gasoline and energy prices.

“This was welcome news, but we have to guard against wishful thinking,” she said, adding that it’s far too soon to conclude inflation has peaked.

Bringing inflation back down to the Fed’s 2 percent target would take “a lot of fortitude,” Mester added.

“This will be painful in the near term, but so is high inflation,” Mester said, warning that fight against soaring prices could push unemployment higher and cause the economy to slow down more than expected.

“There will be bumps along the road. Financial markets could well remain volatile as financial conditions tighten further. Growth could slow more than expected, and the unemployment rate could move above estimates of its longer-run level,” she said.

The U.S. economy saw negative growth for two consecutive quarters this year, meeting the rule-of-thumb definition for a recession.