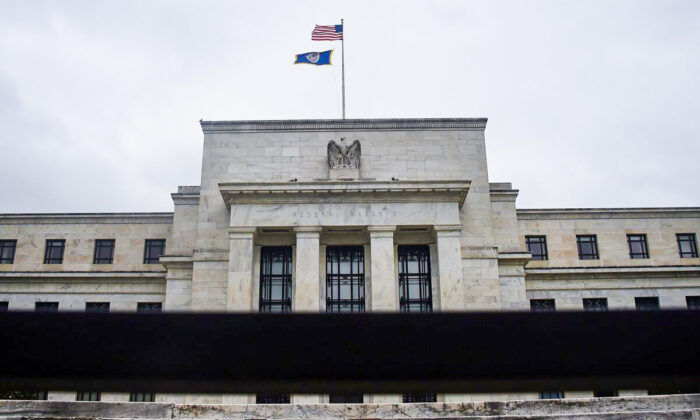 The Federal Reserve building is seen through a fence in Washington, D.C., on June 17, 2020. (Olivier Douliery/AFP via Getty Images)
Economy

The U.S. bond market on June 29 moved to price in an anticipated move by the Federal Reserve to cut the interest rate by a half-point in early 2023 after traders predicted that a likely recession would eventually force the central banks to slow down its aggressive tightening policies.

The Fed and other central banks around the world have been attempting of late to control record inflation with interest rate hikes.

Policymakers at the Fed increased the benchmark interest rate by 75 basis points on June 15 to a range of 1.5-1.75 percent, with Fed Chairman Jerome Powell hinting at another hike in July.

The European Central Bank has also confirmed that it will raise interest rates in July by 25 to 50 basis points, the first time it has done so in 11 years, and will push for a second hike in September.

Powell said on June 29, that the Fed is raising rates “expeditiously” and plans on moving “into restrictive territory fairly quickly,” which is the point where borrowing costs become high enough to start restraining economic growth.

The chairman said that he has faith that the U.S. economy would avoid recession and warned that a failure to control high inflation levels would be more damaging to the economy than raising the benchmark rate.

The decision to raise interest rates has come at a time of declining consumer sentiment, along with fear that fallout from higher food and energy costs will spur an economic recession.

“Can you really hike interest rates into a recession even if inflation is high? That would be unusual,” Erik Nielsen, Global Chief Economist at UniCredit, told CNBC on June 28.

Nielsen is concerned that the U.S. and Western economies may soon be facing a recession and that the central banks are not in a good position to combat inflation.

“There is a very high chance the Fed ends up cutting rate towards, sort of, the end of next year or something, and this is the recession story again,” he said.

Others disagree about signs of entering a recession, such as Loretta Mester, President of the Federal Reserve Bank of Cleveland.

“I don’t see that in my baseline, but again, we’re just going to have to assess economic conditions on the ground as we go forward,” Mester told CNBC on June 30.

She did admit, however, that growth will slow this year, but does not see any rate cuts down the line for now.

Meanwhile, market expectations over inflation in the past two weeks have dropped along with gas prices, while a decline in stocks has fueled a demand for Treasuries, weighing on rates across the curve.

There has been a rush by traders to bet on higher borrowing rates, lifting expectations that the peak of the Fed’s tightening cycle will come soon.

Many traders are preparing for the moment on when and how soon the Fed will eventually decide to cut benchmark rates, which has seen increasing attention in recent weeks.

Swap contracts, which have referenced the Fed’s policy meetings in 2023, had traders anticipating a rate of close to 3.08 percent by December.

This is more than half a percentage point below the market-implied peak of 3.62 percent at the end of the first quarter.

The shift of the peak into next year was demonstrated by an inversion of 50 basis points between three-month euro-dollar interest rates for futures contracts between December 2022 and December 2023, according to Bloomberg.

U.S. rates fell in mid-June after traders downgraded their future assessments at where the Fed’s benchmark policy would hit its peak at around 4 percent, while expectations for a cut in rates after going over the curve have risen.

Yields on Treasury notes and bonds were lower on June 29, at around 5 to 8 basis points across the curve, with the five-year nominal rate falling to as low as 3.15 percent.

Most analysts expect the Fed’s benchmark policy to continue through the end of 2023, but others are worried that continuing the rate hikes into next year is untenable and may even perpetuate a worse market crisis.

At the beginning of June, the World Bank cut back its global growth forecast, warning that the American and European economies are at risk of stumbling into a period of 1970s levels of stagflation.

The Fed GDP tracker is also indicating that the U.S. economy is headed for a recession, with the Atlanta Fed’s GDPNow tracker pointing to a 1 percent contraction in GDP for the second quarter.

This follows a 1.6 percent contraction in U.S. GDP in the first quarter of 2022.

Economists at Berenberg told CNBC they expect the Fed to start cutting rates by late 2023 and see its key rate peaking at a range of 3.5–3.75 percent in the first half of 2023.

“We project that the Fed will then pause and lower rates in response to lower inflation and recessionary conditions—including a marked rise in unemployment from Q4 2023 onwards—to a range of 2.75-3% for the Fed funds rate by late 2024,” Berenberg said in a note on June 21.

Berenberg said it forecasts a contraction in U.S. GDP by a total of 0.4 percent in 2023, which is a clear sign of a recession.