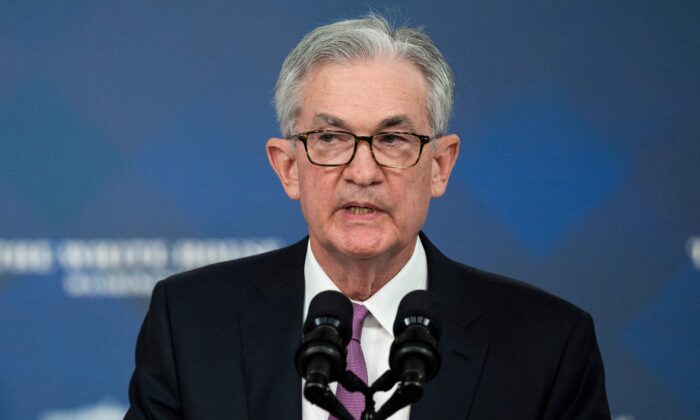 Federal Reserve Chairman Jerome Powell speaks after President Joe Biden nominated him to continue as Chair of the Board of Governors of the Federal Reserve Systems during an event at the White House in Washington on Nov. 22, 2021. (Jim Watson/AFP via Getty Images)
Economy

Powell is set to deliver public remarks—his first on the new variant—before the Committee on Banking, Housing, and Urban Affairs and Senate lawmakers on Tuesday.

There is growing concern among scientists about what Omicron’s impact might be, given that it has an unusual combination of mutations and may be able to evade immune responses or be more transmissible.

“The recent rise in COVID-19 cases and the emergence of the Omicron variant pose downside risks to employment and economic activity, and increased uncertainty for inflation,” Powell said in prepared testimony released on Monday.

“Greater concerns about the virus could reduce people’s willingness to work in person, which would slow progress in the labor market and intensify supply-chain disruptions,” the chairman said.

Powell did not discuss any proposed monetary policy actions by the central bank or whether officials are considering changing the pace of the tapering of its asset purchases, but said, “We understand that our actions affect communities, families, and businesses across the country.”

“Everything we do is in service to our public mission. We at the Fed will do everything we can to support a full recovery in employment and achieve our price-stability goal,” he concluded.

Fed policymakers unanimously decided at last month’s meeting to begin dialing back the central bank’s $120 billion in monthly purchases of Treasuries and mortgage-backed securities by $15 billion per month, after unleashing extraordinary monetary support for governments’ pandemic lockdowns that paralyzed the economy. The so-called “taper” will conclude in June.

Powell is set to appear before the Senate on Tuesday alongside Treasury Secretary Janet Yellen, as they are both required to testify before Congress on a quarterly basis under the March 2020 COVID-19 economic-relief legislation, also known as the CARES Act.

“Of course, the progress of our economic recovery can’t be separated from our progress against the pandemic, and I know that we’re all following the news about the Omicron variant,” Yellen said in prepared remarks. “As the president said yesterday, we’re still waiting for more data, but what remains true is that our best protection against the virus is the vaccine. People should get vaccinated and boosted.”

As federal officials are pulling back bond purchases in line with falling unemployment levels, it is unclear how the emergence of Omicron will affect those plans.

Elsewhere in his prepared remarks, Powell will deliver more direct comments on inflation, saying that “inflation is elevated, largely reflecting factors that are expected to be transitory,” something the Fed has long maintained.

“Supply and demand imbalances related to the pandemic and the reopening of the economy have contributed to sizable price increases in some sectors. Overall financial conditions remain accommodative, in part reflecting policy measures to support the economy and the flow of credit to U.S. households and businesses,” Powell will say, while noting that, “risks to the economic outlook remain.”

Officials from the World Health Organization (WHO) have said they are monitoring the new Omicron variant, also called B.1.1.529, and have labeled it a “variant of concern,” due to its numerous mutations.