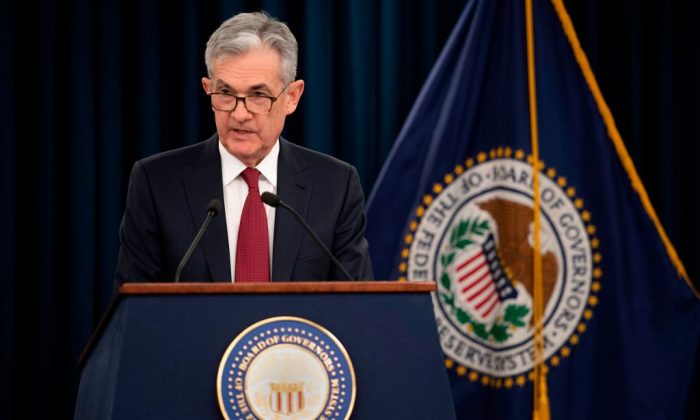 A top White House economic adviser said that U.S. Federal Reserve Chairman Jerome Powell would not be losing his job due to the recent stock-market plunge. President Donald Trump had reportedly considered ousting Powell for raising interest rates, which he blamed for the recent tumble.

Kevin Hassett, the current chairman of the Council of Economic Advisers, told reporters Dec. 26 that Powell’s job was “100 percent” safe. It’s unclear if the president can legally dismiss Powell.

Meanwhile, Hassett also said that Trump is happy with the work of Treasury Secretary Steven Mnuchin, who just days ago, on Dec. 23, called the CEOs of six major banks in a bid to keep financial markets running smoothly.

“I am highly confident that the president is very happy with Secretary Mnuchin,” Hassett told Fox Business Network. “I’ve met with them together in the Oval (Office) many, many times and they have a very collegial and productive working relationship.”‘

Trump recently blamed the Federal Reserve, describing it as the “only problem” the economy has.

“They don’t have a feel for the Market, they don’t understand necessary Trade Wars or Strong Dollars or even Democrat Shutdowns over Borders. The Fed is like a powerful golfer who can’t score because he has no touch – he can’t putt!” Trump wrote, in part, on Twitter.

Powell took over as chairman early last February, after being appointed by Trump. He has continued on the same path of his predecessor, Janet Yellen, with gradual rate hikes.

In a surprise, on Dec. 26, U.S. stocks had their biggest single-day gain in history. Prior to the stunning reversal, the S&P 500 had been on course for a 20 percent drop from the market’s high in October, the worst decline since the Great Depression, according to Reuters.

Responding to reporters on Christmas Day following a holiday video call with U.S. troops, Trump said that he had confidence that Mnuchin would be able to stabilize the stock markets: “Very talented guy, a very smart person.”

“The fact is that the economy is doing so well that they raised interest rates. That’s a form of safety,” he continued.