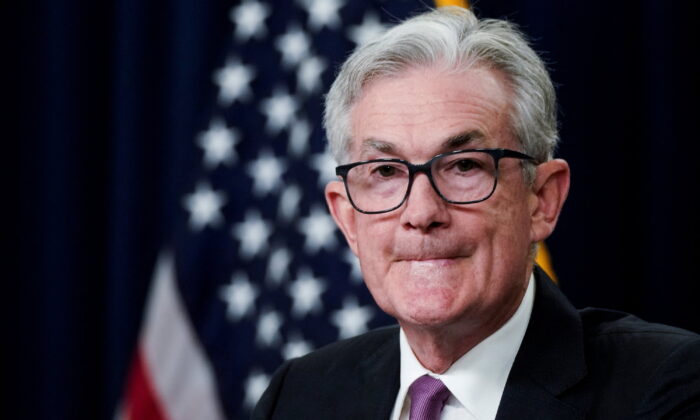 Federal Reserve Chairman Jerome Powell, said on Sept. 8, that the central bank remains “strongly committed” to fighting inflation, but he still believes it can be tamed without the “very high social costs” as in past attempts to control prices.

Powell was interviewed in a 40-minute webcast by Cato Institute President Peter Goettler, as the central bank attempts a “soft landing” for the economy in the worst inflation crisis since the early 1980s.

The Fed since March has raised interest rates to a range between 2.25 and 2.5 points.

Powell reconfirmed that the central bank is totally committed to bringing down the highest inflation rates in 40 years, in order to prevent the economic situation from hitting a 1970s-style crisis.

This has strengthened expectations that there will be a third consecutive 75 basis-point hike later this month, as Fed policymakers said they are totally committed to the planned rate increases.

“It is very much our view, and my view, that we need to act now forthrightly, strongly, as we have been doing, and we need to keep at it until the job is done,” said Powell.

Investors are widely expecting the Fed to increase its policy rate by 75 basis points instead of pressing for a smaller increase of 50 points, which some more cautious policymakers have favored.

Goettler did not ask the press Fed Chair for information regarding the Federal Open Market Committee (FOMC) meeting on Sept. 20–21, where it is expected to raise interest rates by 50 to 75 basis points, but Powell did restate the Fed’s aggressive stance in the interview.

However, Powell did stress that rates will stay higher for longer, saying “history cautions against prematurely loosening policy.”

“We need to act now, forthrightly, strongly as we have been doing, and we need to keep at it until the job is done,” said Powell, adding that “the Fed has and accepts responsibility for price stability.”

“My colleagues and I are strongly committed to this project and we will keep at it until the job is done.”

The Fed is expected to announce its fifth consecutive hike since the start of the year at the September FOMC policy meeting, along with updated economic projections that will show if there is a risk of rising unemployment.

U.S. consumer price inflation data after the last Fed meeting in July, gave some indications that the pace of inflation was slowing down, but not strongly enough to prove that it had reached its peak.

The consumer price index for August, which is expected to be released Sept. 13, will be the last critical data point that Fed policymakers will use to make their final decision.

Central bank policymakers are currently deliberating on how much and how fast borrowing rates need to be raised to control inflation, and how to tighten the monetary supply without triggering a recession and weakening the labor market.

The labor market remains strong with unemployment at an all-time low, while last week’s report showing a decline in weekly U.S. unemployment claims pointed to its continued strength.

Many economists say that the jobless rate would have to double from the current 3.7 percent to eventually lower inflation, which many politicians and other Fed critics wish to avoid.

The Atlanta Fed wage tracker shows earnings through August continuing to grow at a 5.7 percent annual pace, which some economists say may keep the Fed from reaching its 2 percent inflation target.

The European Central Bank hiked its policy rate by 75 basis points on Sept. 8, raising expectations that the Fed will persist with its hawkish policies.

The ECB is dealing with massive inflation due to energy shortages brought about by a lack of natural gas from Russia.

The Bank of Canada also approved a 75 basis point hike on the same day.

At Jackson Hole two weeks ago, Powell said that the central bank’s next phase of rate hikes is likely to lead to weak growth and financial pain.

He was referring to former Fed Chair Paul Volcker’s fight against inflation in the early 1980s, which triggered a recession and unemployment rates up to 10 percent, before prices went down, allowing a recovery.

Volcker was dealing with a decade of rising inflation that led to severe stagflation in the U.S. economy.

Powell praised his predecessor, who was widely credited with winning the fight to lower inflation, despite political pressure, after several failed attempts by earlier Fed chairmen.

Powell said that it was critical to prevent inflationary changes in spending, earning, and investing habits that would be hard to undo.

“The public had really come to think of higher inflation as the norm and to expect it to continue, and that’s what made it so hard to get inflation down in that case,” Powell said speaking of the early 80s,

“The takeaway for policy makers, he added, is that “the longer inflation remains well above target, the greater the risk the public does begin to see higher inflation as the norm and that has the capacity to really raise the costs of getting inflation down.”

He said that the Fed can this time “avoid the kind of very high social costs that Paul Volcker and the Fed had to bring into play” 40 years ago, because inflation expectations are currently centered around the central bank’s two percent target rate.

He said that even if unemployment starts to rise faster than expected, the central bank will be focused on working on price control.