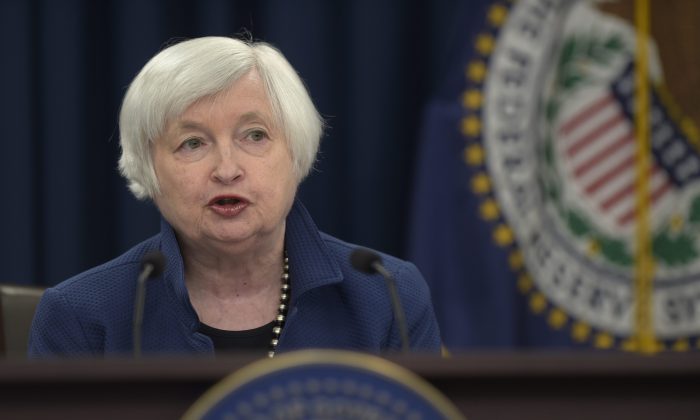 Federal Reserve Chair Janet Yellen speaks during a news conference in Washington on March 15, 2017. She said the Fed has enough time to react to changes in fiscal policy from the Trump administration. (AP Photo/Susan Walsh)
Business

US Fed Chair Yellen: ‘We Have Plenty of Time to See What Happens’

The U.S. Federal Reserve raised its key policy rate by 0.25 percent on March 15—the second such increase since mid-December—however, the central bank remains in wait-and-see mode regarding the impact of the Trump administration’s fiscal policy.

“The simple message is the economy is doing well,” Fed chair Janet Yellen said at her press conference after the release of the interest rate decision and summary of economic projections.

Without the benefit of any fiscal stimulus, the economy is on the right track, and Yellen confirmed that the Fed hasn’t changed its view of the economic outlook.

She said it was too early to predict the effect of fiscal policy such as tax cuts and infrastructure spending. Therefore the Fed’s economic forecasts are essentially unchanged from those in December despite the exuberant reaction in stock markets. The S&P 500 is up 5.9 percent since the Fed’s Dec. 14 meeting.

“To me it’s absolutely fascinating that here we are a full three months later and the forecasts are unchanged … zero clarity on fiscal policy front over the last three months,” said BMO Chief Economist Doug Porter in a phone interview.

The discrepancy in growth forecasts may appear small, but the difference is private sector economists and financial markets factor in a net positive boost from fiscal policy. Yellen stressed the uncertainty surrounding the size, timing, and character of the fiscal expansion and that the Fed had not discussed fiscal policy in detail.

“The fact that they were comfortable enough to raise interest rates twice in two quarters now suggests they think growth will actually be stronger than what they projected,” Porter said.

As for the impact of fiscal policy, Oxford Economics Chief U.S. Economist Gregory Daco stated that where the U.S. economy is in the business cycle—in a lengthy expansion phase—is more relevant than historical precedent.

“We’re close to full employment, we’re close to the inflation target. In that environment, fiscal stimulus tends to have less bang for its buck and the Fed generally tends to tighten monetary policy. That’s really a very specific environment we’re facing right now,” he said in a phone interview.

“They [the Fed] are still going to be quite cautious when it comes to monetary policy tightening and not necessarily assume a big upside or big downside risk from the Trump administration, but rather adopt a conservative pace of rate hikes given that there is that uncertainty,” Daco said.

Regarding the time it would take to enact fiscal policy, the impact is expected to be felt in 2018 at the earliest.

“We have plenty of time to see what happens,” Yellen said.

And it’s not a certainty that the Trump administration’s fiscal policy will turbocharge economic growth.

Guided by his firm’s survey of 250 of their clients suggesting that President Donald Trump’s policies are a double-edged sword, Daco isn’t ready to unequivocally call Trump’s policies as upside risk. “I think that’s very much reflective of the true underlying sentiment around the world,” Daco said.

The specter of protectionism and fixing immigration accompany the tax cuts and infrastructure spending.

“You certainly have a lot of Republican congressmen and [congress]women who seem concerned about the budget deficit and wouldn’t actually be in favor of a net loosening of fiscal policy, so it’s not clear that’s what’s going to get done on that front,” Porter said.

The Fed statement provided a reminder that its 2 percent inflation target is symmetric. Fighting above-target inflation is not something the Yellen-led Fed has had to deal with, but it could become a new concern given the strengthening economy and the prospects for fiscal expansion.

“I would see that as a very mild reminder that they don’t want to see inflation run much above 2 percent,” Porter said. The Fed might have to raise rates at a faster pace in 2018 depending on the effects of fiscal policy, or live with above-target inflation.

Daco said it’s “not necessarily such a bad thing” to allow inflation to rise past 2 percent given that price increases have been coming from energy’s rebound. Therefore, he argues the Fed is not “behind the curve” in raising interest rates.

“I think it’s on track to tighten monetary policy at a fairly gradual rate, but at the same time not choke a recovery,” Daco said.

Given that the rate increase was universally expected, the question in the minds of market participants became how quickly the Fed would ratchet up the pace of rate hikes this year and next year.

The Fed’s “dot plot” conveyed that two more 0.25 percent rate hikes are penciled in for 2017 with three more in 2018. That is unchanged from December’s dot plot.

“Today’s statement is a little less hawkish than some had feared,” said Bill Gross of Janus Capital Group in an interview with CNBC. He said that Yellen is “disposed to be dovish.”

“The immediate reaction by markets right across the board was almost like a sigh of relief that the Fed didn’t come in with a more hawkish slant,” Porter said. U.S. Treasury bonds and the stock market rallied and the U.S. dollar weakened against other major currencies.