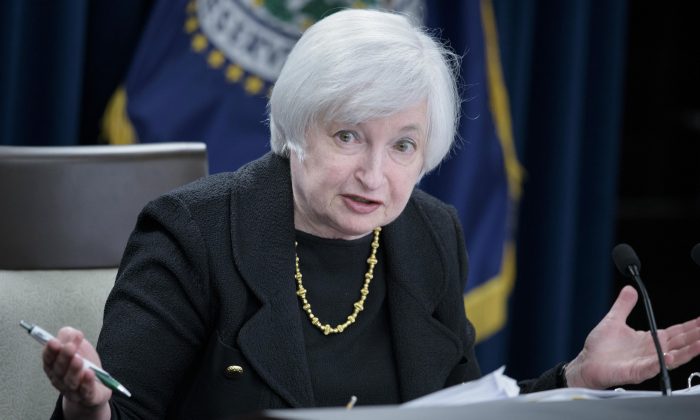 WASHINGTON—Federal Reserve Chair Janet Yellen says while many savers have been frustrated by years of low interest rates, the rock-bottom rates were needed to boost the economy after the Great Recession.

In a letter to consumer advocate Ralph Nader, Yellen said Monday that the low rates helped create millions of jobs by lowering borrowing costs for businesses and consumers.

The Fed has indicated it may soon be ready to begin raising rates. Yellen reiterated that subsequent rate hikes will be gradual.

Yellen was responding to a letter from Nader, who said he was writing on behalf of frustrated savers who have been getting near zero interest on their bank and money-market savings accounts.

“We are tired of this melodrama that exploits so many people who used to rely on interest income to pay some of their essential bills,” Nader wrote to Yellen in the open letter published on his blog. “Think about the elderly among us who need to supplement their Social Security checks every month.”

Nader urged Yellen to consult her Nobel Prize winning husband, economist George Akerloff, and consider the prospect that “tens of millions of Americans, with more interest income, could stimulate the economy by spending toward the necessities of life.”

The Fed has kept a key interest rate at a record low near zero since December 2007. In her reply that was made public by the Fed, Yellen said that the low rates were only a partial reflection of Fed policies. She said they also reflected economic weakness after the 2008 financial crisis and a deep recession.

She said the low rates had made large consumer purchases more affordable and encouraged business to invest, actions that bolstered the recovery and helped create millions of jobs.

When the Fed begins to raise rates, Yellen wrote, the increases will likely be gradual to avoid the mistakes other countries have made in raising rates too quickly. She said that Japan, where interest rates have remained near zero for most of the past 25 years, “serves as a cautionary tale.”

Many private economists believe that the Fed will move to raise rates by a quarter-point at its next meeting on Dec. 15-16 if economic data between now and then shows further improvements in the job market.