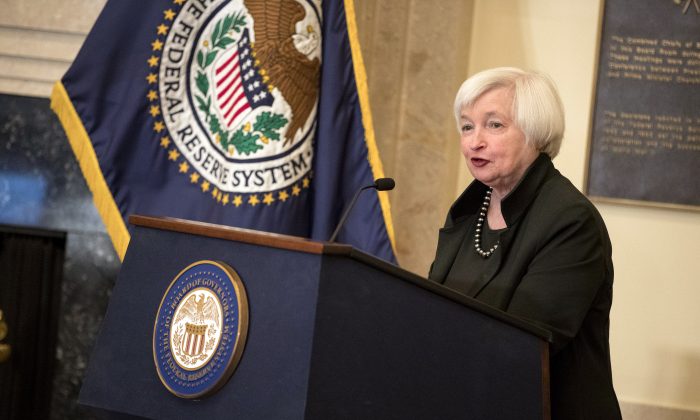 The Federal Reserve, along with everybody else, is playing the waiting game—waiting to see what the Trump administration and Congress can actually get done.

The Federal Open Market Committee (FOMC) left the target range for its key policy rate unchanged at 0.50 to 0.75 percent on Wednesday, Feb. 1.

The Fed’s December economic projections suggested three rate increases in 2017. It was not expected to raise rates on Feb. 1 after announcing a rate increase in its last meeting and given that Fed chair Janet Yellen was not holding a press conference.

In its statement that discussed the U.S. economy’s ongoing improvement, the most notable change from December’s statement was the addition of the sentence, “Measures of business and consumer sentiment have improved of late.”

“To include that new information is an acknowledgement of something on the ground that’s happening with potential upside risk, but not enough to really cause the Fed to want to change its thinking about its rate hike profile at this point in time,” said BMO deputy chief economist Michael Gregory in a phone interview.

“These [‘animal spirits’] are powerful forces,” he added.

“Animal spirits,” which translate into an increase in business and consumer spending based on the perception that the economy is improving, has been noted in a 12-year high in the NFIB’s Small Business Optimism Index and a more than 15-year high in the Conference Board’s Consumer Confidence Index.

But the Fed did not “telegraph” the next rate hike and its statement was interpreted as dovish. The U.S. dollar index and the 2-year and 10-year Treasury bond yields fell immediately after the statement was released.

“There’s a tacit acknowledgement there that if the economy were to grow faster right now that’s a good thing,” Gregory said.

RBC expects the U.S. economy to increase by an above-trend rate of 2.3 percent in the first quarter of 2017.

The Fed statement made no allusion to impending fiscal policy expansion from the Trump administration, however, back in December FOMC members had already begun to factor in fiscal expansion in their forecasts.

But to the Fed, what matters is employment and inflation. “We’re still a long way before fiscal policy—whatever gets done—translates to those two variables, which ultimately the Fed is targeting,” Gregory said.

Inflation is clearly moving closer to the 2 percent target. The Fed’s preferred measure, the personal consumption expenditure (PCE) deflator was up 1.6 percent in December. The Feb. 1 FOMC statement noted that inflation “will rise to 2 percent.” In comparison with December’s statement, it eliminated mention of the effect of transitory declines in energy and import prices so as to signal more certainty for its assertion.

The U.S. economy is basically at full employment. Wages are being pressured higher as companies struggle to find workers to fill positions.

Gregory’s sense is the Fed has taken a small step toward the next rate hike, with the upgrade of inflation and recognition of animal spirits, but it minimizes the odds for that next hike coming in March.

There is still considerable uncertainty about the future of government policy under the Trump administration, but it’s undeniable that there is strong underlying momentum in the U.S. economy. The Fed acknowledged the improvement on Feb. 1, but did little to raise expectations for a March rate hike.