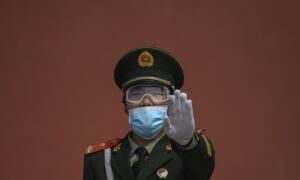 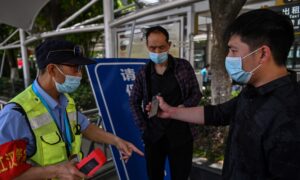 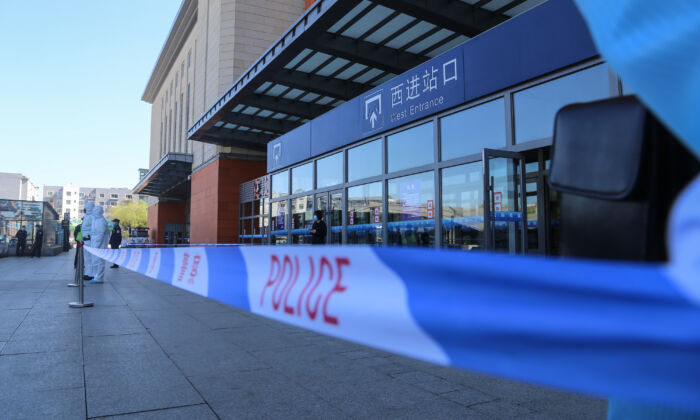 Police locked the Jilin city's railway station in Jilin, China on May 13, 2020. (STR/AFP via Getty Images)
INSIDE CHINA

Amid a severe CCP virus outbreak in northeastern China, authorities have isolated more than 8,000 people on May 15 who were close contacts of the first people diagnosed in the second wave outbreak.

The CCP (Chinese Communist Party) virus, commonly known as the novel coronavirus, first broke out in the central Chinese city of Wuhan in late 2019. The virus quickly spread to all parts of the country.

But in March, local authorities throughout China proclaimed that there were little to no new infections, and that the virus was contained.

But since April, authorities in regions of northeastern China confirmed a second wave outbreak.

China’s National Health Commission announced on May 15 that four additional people were diagnosed in Jilin Province.

Meanwhile, Chinese portal website Sina reported that one of the patients in the latest outbreak—which first erupted in Shulan, a county level city located in Jilin city, Jilin Province—was a 45-year-old woman who cleans private homes and companies for a living.

Since May 2, when she may have been infected with the virus, she worked at Accor Ji Hotel in Fengman district, a crayfish restaurant in Changyi district, and five residential compounds located in Chuanying, Changyi, and Fengman districts, according to Sina.

When she went out for work, she had meals at small-sized restaurants close to the places she worked. She also went shopping at different markets every two to three days.

She was isolated at a quarantine center after one of her close contacts in Fengman district was diagnosed with the virus on May 12. She herself was diagnosed on May 14.

She is one of the latest infections who was exposed to the virus from the “patient zero” of the Shulan outbreak, another 45-year-old cleaning lady who works at the city’s police bureau.

The patient zero was diagnosed on May 7. Several of her family members and close contacts were later diagnosed with the virus.

On May 15, state-run newspaper Beijing Daily posted on its official Weibo account that more than 8,000 people were placed under quarantine—all related to the cluster outbreak that began with the patient zero.

The close contacts are mostly located in Jilin city and Shenyang city.

The Jilin city government said it was searching for more people who had contact with the diagnosed patients in the past two weeks and should be isolated.

Because the diagnosed patients traveled actively—visiting supermarkets, hospitals, barber shops, markets, and restaurants before they were diagnosed—the newspaper said it suspected there would be a large number of people who would need to be quarantined.

One insider, who wished to remain anonymous, said that the mother and two sisters of the patient zero in Shulan live at the Jianxin residential compound.

The insider added that 61-year-old Li, an elder sister to the first patient, worked at a local public bathhouse. Li was in charge of managing the bathhouse’s storage and purchasing, as well as picking up goods and cleaning the sauna room.

Li’s 37-year-old daughter was diagnosed with COVID-19 along with Li on May 9. The daughter worked at the reception desk of the bathhouse. She then inadvertently spread the virus to a 31-year-old man who works at the Shulan city government, the insider said.

Mr. Yu operates a small grocery store close to the bathhouse. He said that after the mother-daughter pair was diagnosed, local authorities tightened their monitoring of the area.

“This morning, a customer wanted to buy cigarettes. My wife just opened the door [of the store to serve the customer], and a police officer arrived and asked us to close the door,” Yu said.

Yu added that authorities have asked all possible close contacts of patients to report themselves. “All need to be isolated and tested. They may not have symptoms but were infected,” Yu said.

Mr. Liu operates a shop in the same neighborhood. He said most of his fellow business owners closed their doors. “One reason is there’s no customers around. The most important thing is that we feel it’s risky to come into contact with people. So we decided to close the stores,” Liu said.

State-run China Radio International reported on May 14 that the Chinese central government set up a makeshift tent as a testing center in Shulan. Beginning on May 15, the center can perform 1,000 nucleic acid tests.