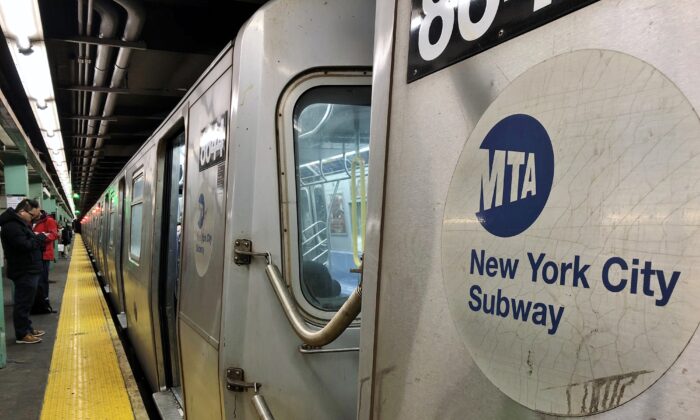 A lieutenant with the New York City Fire Department has shared subway safety tips with members of the public after an Asian woman was pushed to her death in front of an oncoming train in the city on Saturday.

Michelle Alyssa Go, 40, was waiting on the southbound platform inside Times Square subway station on Saturday morning when Simon Martial, 61, who has mental health issues, pushed her onto the train tracks and she was struck by an R train, officials said.

A candlelit vigil was held in her honor on Tuesday on the Red Steps at Father Duffy Square in Times Square. It was attended by NYC Mayor Eric Adams, Congresswoman Grace Meng, City Council Speaker Adrienne Adams, and other elected officials as well as Go’s family and friends, the non-profit organization Asians Fighting Injustice said.

“Her senseless murder has shaken the city and has seeded more sorrow, fear, and anger in the Asian community,” the organization said.

Police said an investigation into the incident is still ongoing but that they believe the attack was unprovoked.

As the investigation gets underway, FDNY fire lieutenant Sarinya Srisakul has taken to TikTok to share her tips on subway safety and what to do if you find yourself on the tracks as a train approaches.

“I hate talking about this,” Srisakul begins the video, “but let’s talk about how to survive getting pushed on the subway. First of all your best defense is self-defense.”

The lieutenant then recommends that people try to take trains at times where there are other people around in the station and that while waiting for the train to arrive, they wait by the wall, preferably with others, and not near the train track.

“If you do get pushed on the tracks from the platform, it is a five-foot wall so the only way you can get back up is if people on the platform are there to help you up,” Srisakul explained. “If you can’t get pulled up, walk to the end of the tunnel and you should see a ladder that you can climb up to the platform.”

At the end of the platform, there will also be blue lights where individuals will find a push-to-talk phone that allows them to speak to the dispatcher for the subway, Srisakul said.

The most critical thing to know is that the third rail in between the tracks is an extremely high voltage rail and must be avoided at all costs as it can kill a person if they come into contact with it. The lieutenant said there is a button along the tracks that will take the power out of the third high voltage rail.

If a person is unable to get back onto the platform in time before a train arrives, there are also notches in between the train tracks that serve as clearances for workers, allowing them to stand within them while the train goes past. However, she noted that if there are red and white lines visible on the wall of the track, this indicates that there are no clearances.

Srisakul went on to give advice for bystanders who witness someone falling onto the tracks, advising them to check to see if there is an oncoming train and, if they have time to safely do so, try to pull the person up from the tracks, noting that two people working to help pull the person up would be faster.

Bystanders should also get other people on the platform to alert workers about the incident so that they can inform the conductor of the train to stop it before it approaches the tracks.

“If you are inside the subway, there are these emergency breaks, they do not make the train stop on a dime, it does take a while for the train to stop and sometimes they do coast but its something that you can do to try to help the person,” Srisakul said.

“I hope these tips help you feel more confident taking the train in New York. We have to help each other during these crazy times,” Srisakul concluded her video.

During a press briefing in Times Square subway station on Saturday, police said they were alerted to the attack at approximately 9:30 a.m. local time and upon attending the incident, they found Go with severe trauma to her body. She was pronounced dead at the scene.

“This incident was unprovoked and the victim does not appear to have any interaction with the subject,” Police Commissioner Keechant Sewell said late afternoon.

Sewell said Martial fled the scene immediately after pushing Go but handed himself into police a short while later. Police said that it is unclear whether Go was targeted because of her race.

Police later charged Martial with murder in connection to the assault.