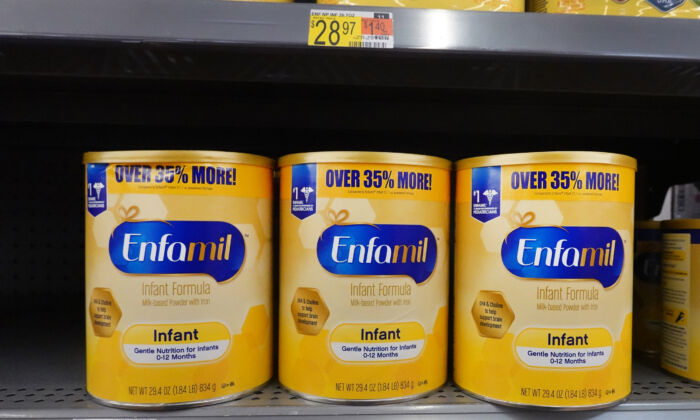 Baby formula for sale at a big box store in Chicago on Jan. 13, 2022. Baby formula has been is short supply across the country for the past several months. (Scott Olson/Getty Images)
US News

The Food and Drug Administration (FDA) is working “around the clock” to address the shortage of baby formula in the United States, White House press secretary Jen Psaki said on May 9.

Psaki’s announcement comes as stores across the United States have been struggling to stock infant formula amid supply chain issues and a number of recalls of contaminated formulas.

The shortage has prompted some stores, including Walgreens and CVS, to limit the amount that can be purchased by each shopper at one time.

“The FDA issued a recall to ensure that they’re meeting their obligation to protect the health of Americans, including babies—who, of course, were receiving or taking this formula—and ensure safe products are available. That’s their job.” Psaki said at a May 9 press briefing.

“Ensuring the availability is also a priority for the FDA and they’re working around the clock to address any possible shortage,” she added.

According to an analysis of more than 11,000 stores across the United States by Datasembly, which collects product data and provides real-time pricing, the out-of-stock rate for baby formula in the first 7 months of 2021 was about 2 percent to 8 percent. But that began to rise sharply in July when it moved into double digits.

Between November 2021 and early April 2022, the out-of-stock rate increased from 11 percent to 31 percent, Datasembly said. That rate increased again and was at 40 percent for the week ending April 24.

“Inflation, supply chain shortages, and product recalls have brought an unprecedented amount of volatility for baby formula,” said Datasembly CEO Ben Reich in statement on the company’s website. “We expect to continue to see the baby formula category being dramatically affected by these conditions.”

Psaki said on May 9 that the FDA is taking “a number of steps” to address the shortage, including working with major infant formula manufacturers to ensure they’re increasing production and working with the industry to “optimize supply lines, product sizes, and prioritizing product lines that are of greatest need.”

She did not provide further details as to exactly how the supply lines would be “optimized” but noted that the FDA is also “exercising flexibility and expediting review of notifications of manufacturing changes that will help increase supply, particularly in the case of specialized formula—so that applies to that as well—for medical needs.”

Finally, the FDA is working to streamline the import entry review process for infant formula products coming from notified foreign facilities, she noted.

“The FDA, it is not just their responsibility in their view to ensure that we’re meeting our obligations to protect Americans. It is also their obligation to take steps to make sure supply can be met when they take these steps,” Psaki said.

When asked whether there is a national stockpile of baby formula, the press secretary said she doesn’t believe there is.

Further exacerbating the current situation regarding the lack of baby formula are a number of recalls of contaminated milk products.

The products were manufactured at the company’s plant in Sturgis, Michigan. All four infants were hospitalized for infections related to Cronobacter bacteria, and the bacterial infection may have contributed to two deaths, according to the FDA.

An FDA investigation led to the facility being shut down.

Abbott Nutrition said on April 15 that it is working closely with the FDA to restart operations there and is in the meantime boosting the supply of infant formula through production at its other facilities.