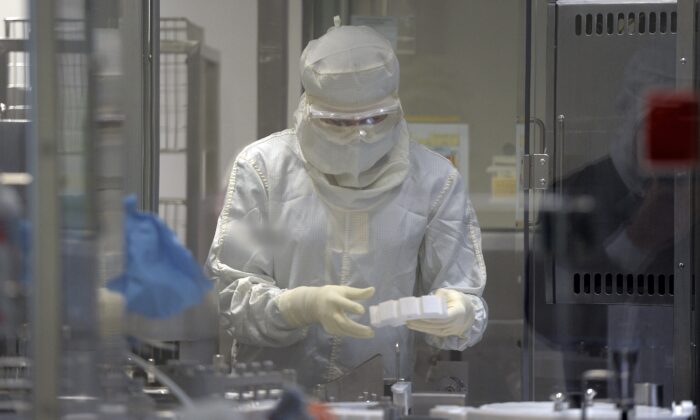 An employee works in an unit dedicated to the production of insulin pens at the factory of the U.S. pharmaceutical company Eli Lilly in Fegersheim, eastern France, on Oct. 12, 2015. (Frederick Florin/AFP via Getty Images)
Chinese Regime

The U.S. Food and Drug Administration has declined to approve a lung cancer drug U.S. drugmaker Eli Lilly and its Chinese partner tested clinically only in China.

Lilly said the U.S. Food and Drug Administration (FDA) recommended an additional multi-regional clinical trial for the drug known as sintilimab, according to a press release dated March 24.

Sintilimab is an immunotherapy drug that is designed to work with chemotherapy to treat patients with nonsquamous non-small cell lung cancer (NSCLC). Lilly has co-developed the drug with China-based Innovent Biologics.

Tyvyt, sintilimab’s brand name in China, has been approved in the country for four different uses, including using it in combination with another Lilly’s cancer drug Alimta and platinum-based chemotherapy for treating NSCLC patients.

Lilly said it and Innovent were “assessing next steps for the sintilimab program” in the United States.

The FDA’s rejection is a sign of an increasingly tough U.S stance on drugs being tested solely in China, as Chinese drugmakers seek to sell their products in the United States at a lower cost by conducting clinical trials only in China.

The decision comes after a hearing in February, when the FDA’s Oncologic Drugs Advisory Committee, in a 14 to one vote, recommended Lilly and Innovent conduct additional clinical trials that reflect U.S. patients, noting the “lack of diversity” in the Chinese clinical trial of 397 individuals who were all mainland Chinese.

“Acceptance of single country foreign data which does not reflect the diversity of a U.S. population challenges the widespread industry commitment to patient equity and inclusion of underrepresented populations,” according to an FDA document (pdf) on the hearing.

Also at the hearing, FDA officials also said the Chinese clinical study had several shortcomings in its methodology, particularly how the study chose to use progression-free survival instead of overall survival as a measure of the drug’s effect.

Progression-free survival (PFS) is the time from when a patient receives treatment until his condition worsens, while overall survival (OS) is how much time a patient survives after receiving treatment.

“While PFS is an acceptable clinical endpoint, it is less clinically meaningful, and OS remains the preferred endpoint when it can be reasonably assessed,” the FDA document stated.

Other shortcomings included the study population having fewer smokers (65 percent) compared to U.S. patients with nonsquamous NSCLC who were either current or former smokers (85 percent), according to the document.

Before the latest FDA decision, Lilly had wanted to introduce sintilimab in the U.S. market as an alternative to other treatments, such as U.S. pharmaceutical company Merck’s Keytruda.

Lilly and Innovent entered a strategic collaboration in 2015, the press release stated, and the U.S. drugmaker secured an exclusive license for sintilimab for areas outside of China following a 2020 agreement.