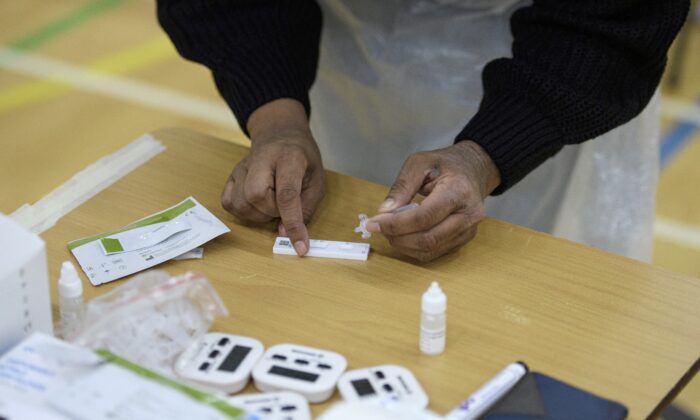 The U.S. Food and Drug Administration (FDA) announced the recall of an at-home COVID-19 test because they have been illegally imported into the United States.

SD Biosensor Inc. confirmed to the FDA that it is voluntarily recalling its Standard Q COVID-19 Ag Home Test over “confirmed reports that the test kits were illegally imported into the United States,” according to the FDA’s bulletin on the action.

“The STANDARD Q COVID-19 Ag Home Test is not authorized, cleared or approved by the U.S. Food and Drug Administration (FDA) for distribution or use in the United States. While there is no known distribution of these tests directly to consumers, SD Biosensor, Inc. is issuing this voluntary recall out of an abundance of caution,” said the drug regulator.

While it is “unlikely” that American consumers will “encounter” the Standard Q COVID-19 Ag Home Test, the FDA encouraged them to discard or avoid any use of the test.

The agency did not elaborate on what might happen if an individual uses the test.

COVID-19 tests made by SD Biosensor Inc., which has its headquarters in South Korea, are approved by South Korean drug regulators, according to its website.

“Consumers that have used the test are strongly encouraged to consider retesting with an FDA authorized or cleared test,” said the FDA.

SD Bionsensor Inc. said it is carrying out an investigation into how the at-home tests were imported into the United States despite no FDA approval. SD Biosensor further said that if future importations are discovered, distributors and individuals will face legal action from the company.

“Distributors or individuals who illegally imported the products initially sold outside the United States will be ordered to stop the illegal activity and initiate an immediate product recall,” the company said in a statement.

It added: “SD Biosensor, Inc. is taking appropriate measures to prevent further attempts at illegal importation of unauthorized tests by strengthening contract terms and their enforcement with its distributors. In addition, the company announced publicly that if such illegal importations are discovered in the future, the responsible individuals/distributors will face strict legal action and liabilities for damages.”

The FDA also previously warned people not to use the E25Bio COVID-19 Direct Antigen Rapid Test because it hasn’t yet been authorized by the agency.