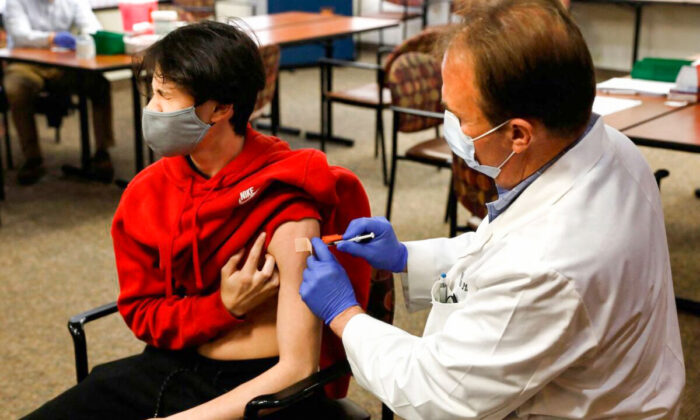 A 15-year-old receives the Pfizer-BioNTech vaccine against the CCP virus in Bloomfield Hills, Michigan, on May 13, 2021. (Jeff Kowalsky/AFP via Getty Images)
Vaccines & Safety

Pfizer and BioNTech’s COVID-19 vaccine for adolescents aged between 12 and 15 years has been granted full approval by the U.S. Food and Drug Administration (FDA), the companies announced on Friday.

The vaccine will be sold under the brand name Comirnaty and is the first and only COVID-19 vaccine to be granted FDA approval for children aged 12 and older, having been available under an emergency use authorization since May 2021 for the 12–15 age group.

To date, more than 9 million Americans aged between 12 to 15 have completed a primary series of the shot.

It will now be sold under the same brand name for adolescents as well.

Comirnaty was previously FDA approved for individuals 16 years and older in August 2021. At the time, acting FDA Commissioner Dr. Janet Woodcock said that the public can be “very confident that this vaccine meets the high standards for safety, effectiveness, and manufacturing quality the FDA requires of an approved product.”

The FDA said on Sunday that the approval of the vaccine for 12 to 15-year-olds came following a “rigorous analysis and evaluation of the safety and effectiveness data” conducted by the federal agency.

German biotech firm BioNTech and U.S. pharmaceutical giant Pfizer said the approval is based on data from a Phase 3 clinical trial of 2,260 participants 12 through 15 years of age.

“A two-dose primary series of the vaccine (30-µg dose) elicited SARS-CoV-2–neutralizing antibody geometric mean titers (GMTs) of 1,239.5, demonstrating strong immunogenicity in a subset of adolescents one month after the second dose,” the companies said.

The immune response produced by the vaccine was comparable to the results of an earlier study of individuals aged between 16 and 25, the companies said.

All cases of COVID-19 reported in the adolescent study were in the placebo group, and zero cases were in the Comirnaty group, Pfizer and BioNTech said.

Of the 30 confirmed cases, the only variant of concern identified was the alpha variant as the efficacy analysis was conducted between November 2020 and May 2021, which was before the surge in Delta and Omicron cases.

“No cases of severe disease occurred in either the Comirnaty or placebo group,” the biotechnology companies stated.

Pfizer and BioNTech said that the “adverse event profile was generally consistent with other clinical data for the vaccine, with a favorable safety profile observed across 6 months of safety follow-up data after the second dose.”

The FDA did not respond when The Epoch Times requested a copy of the “rigorous analysis and evaluation of the safety and effectiveness data.”

Roughly 67 percent of the total U.S. population has been fully vaccinated against COVID-19, according to data from the Centers for Disease Control and Prevention.

Despite vaccines still being rolled out across the United States and the rest of the world, multiple studies have shown that the efficacy of vaccines in preventing COVID-19 is waning.

Children with evidence of prior COVID-19 infection by PCR, antigen, or serology test were excluded from participating in the study.

A separate study in the United States, also published in June, found that vaccine effectiveness of the Pfizer-BioNTech shot in children 5 to 11 years of age and adolescents 12 to 15 years of age also declined.