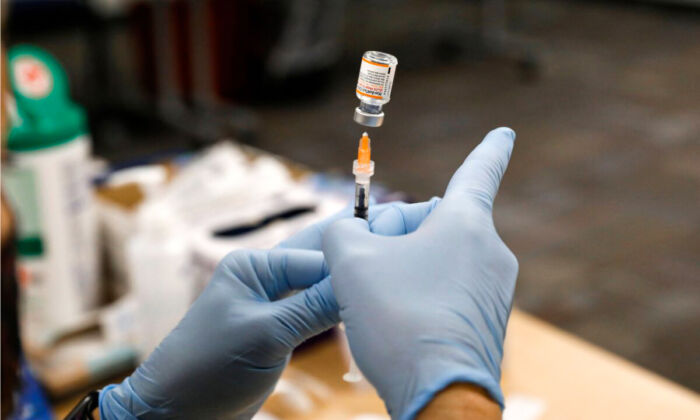 A group seeking all of the documents analyzed by U.S. drug regulators before approving Pfizer’s COVID-19 vaccine has reached an agreement with the government on how fast the documents will be produced.

The Food and Drug Administration (FDA) must produce 10,000 pages by March 1 and another 10,000 pages by April 1 in response to the Freedom of Information Act request and subsequent lawsuit by the Public Health and Medical Professionals for Transparency, according to the agreement, which was approved by the judge overseeing the case on Feb. 2.

The regulatory agency was also ordered to produce 70,000 pages by Aug. 1 and 55,000 pages on or before the first business day of each month thereafter.

The amendment to the production requirement keeps the total schedule at about eight months.

The case was brought by the doctor’s group after the FDA resisted handing over the documents, which analyze Pfizer’s clinical trial evaluating the safety and efficacy of its vaccine and other data.

Both sides agree that the group is entitled to the approximately 450,000 documents, but the FDA had pushed for a production schedule that, if approved, would have taken roughly 75 years to complete.

In a Dec. 14, 2021, hearing, U.S. District Judge Mark Pittman, a Trump appointee and the judge overseeing the case, described it as involving “the most important issue of our time.”

“When you’re being asked or, indeed, mandated to take something and insert a foreign substance in your body, I would think, first and foremost, that the government ought to have to—in our system of government, we’re not in communist Russia or China or in Nazi Germany—when the government has mandated something, I would think the American people are entitled to know the underlying efficacy of what they’re being asked to do. It’s no doubt in my mind that this is something that needs to be produced posthaste. The only question I have in my mind is when and how it can be done in a manner in which I’m not shutting down the entire FDA,” Pittman said.

A Department of Justice (DOJ) attorney said the FDA had “bent over backwards” to get the plaintiffs the information they wanted, but warned against ordering too much production too soon because of the labor the government insists is required.

The attorney pointed to a set of 3,000 documents that the FDA sent to the group, noting that FDA employees had found dozens of instances of potentially identifying information that needed redacting, highlighting why officials want to review the documents “line by line.”

Aaron Siri, an attorney representing the plaintiffs, told Pittman that the FDA could hire independent contractors, get reviewers allocated from other agencies such as the DOJ, or make Pfizer review the documents. The DOJ attorney suggested that only FDA workers can do the review. Siri also noted that the government reviewed Pfizer’s request for emergency authorization for the vaccine in 108 days and that 108 days had already passed since the time of the request for documents.

At one point, Siri told the judge that making the documents public would “give confidence to the American people that the medical product that they’re being mandated to receive, the medical product that the federal government has said is the only thing that will be able to end this pandemic has, in fact, been properly reviewed, licensed and approved.”

Pittman hasn’t ruled on Pfizer’s move to intervene in the case, though that decision should be coming shortly.