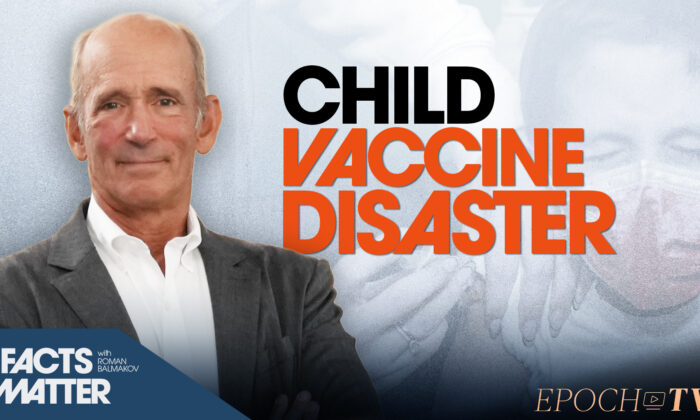 The various national public health agencies, including the Centers for Disease Control and Prevention (CDC), the Food and Drug Administration (FDA), and the National Institutes of Health (NIH) have capitulated and surrendered to pharmaceutical companies, said Dr. Joseph Mercola.

Mercola, a practicing physician of over 25 years, has been educating the public about healthy, disease-free lifestyle choices based on natural medicine since 1997 through his website, mercola.com.

In an Aug. 3 interview for EpochTV’s “Facts Matter” program, Mercola discussed the FDA’s June 15 decision to approve COVID-19 vaccines for infants and young children, saying it has a shocking resemblance to what happens in totalitarian societies.

“It’s probably one of the most egregious and outrageous decisions ever reached in American medicine,” he said. “It’s just shades of Nazi Germany with what they’re doing.”

The Vaccines and Related Biological Products Advisory Committee (VRBPAC), a 21-member panel with the responsibility to “review and evaluate data concerning the safety, effectiveness, and appropriate use of vaccines,” unanimously voted to recommend COVID-19 shots for children aged 6 months to 5 years.

During the voting process, Dr. Cody Meissner, a professor of pediatrics and director of the pediatric infectious disease division at Tufts University School of Medicine, voted to approve the authorization. But he urged that there be clear messaging to parents about the very low risk of infection or hospitalization their infant and preschool aged children will have from COVID-19.

“I think that has to be communicated clearly to parents so they can participate in the decision of vaccinating a child in this age group,” he said.

“There was no justification to it [the approval for infant vaccines],” said Mercola “There’s no risk. Plus, there’s no benefit,” Mercola said of the vaccines for children.

Profits Before the Public Well-being

Mercola criticized the FDA and its advisory panel members for not putting the well-being of the public before profits. He said these agencies started out protecting the public but that this is no longer true, and that the agencies are now just acting in the interests of the drug companies and the government.

According to a 2018 report in Science magazine, of the 107 advisers who voted on FDA committees over the course of 4 years, 40 earned more than $10,000 from the makers of drugs that the panels voted to approve, or from firms competing against the makers of drugs they voted not to approve. Another 26 received more than $100,000, and six people received over $1 million.

Mercola said many former FDA doctors go on to work for drug companies.

“They want to make the public believe that there’s some type of regulatory action going on to protect them, but nothing could be further from the truth,” he said. “It’s a sham. It’s a charade.”

An FDA spokesperson told The Epoch Times via email that all advisory committee members are required to disclose any conflicts of interest according to U.S. law.

“In reviewing the information provided, the FDA seeks to identify all potential financial conflicts related to the particular matter before a committee by reviewing not only the financial interests of a potential advisory committee participant and his immediate family, but also the financial interests, of which he has the knowledge, of the participant’s business partners, organizations for which he serves as an officer, director, trustee, general partner, or employee, and any prospective employer of the member (if there are ongoing employment negotiations or an agreement regarding future employment).”

Because most healthy children do not get severe reactions from COVID-19, and the vaccines do not stop transmission, there is no a rational reason for recommending or requiring the vaccine for children, he said.

“They’re basing these strategies on the assumption that most people that they’re targeting have lost their critical thinking skills,” he said.

Many People Are Hypnotized by Fear

Mercola said although his recent examination of CDC data found that only 2 percent of children under 5 were vaccinated, the push to get children vaccinated is “reprehensible medical malpractice and negligence” and “literally crimes against humanity.”

Mercola discussed the idea of “mass formation” hypnosis and mentioned Mattias Desmet, author of the book, “The Psychology of Totalitarianism,” which explains how large swaths of people can be brainwashed when they’re in a state of isolation and free-floating anxiety, leading them to follow the FDA guidance without thinking critically.

A large part of the public is suffering from mass formation hypnosis, and “Big Tech” companies such as Google, Twitter, and Facebook had a major hand in that, Mercola said.

“Almost all of the natural medicine has been heavily censored and essentially removed from the internet, not only my site but many, many others,” said Mercola.

The reason they do this is that western modern medicine was purged of any alternative and natural components about 120 years ago, said Mercola, with the publication of the Flexner Report of 1910. This document changed the face of modern medical education, he said.

“What I didn’t mention earlier is that what happened [as a consequence of the 1910 Flexner Report] is that they excluded the entirety of natural medicine, all nutrition,” he said. “It was deleted from the medical school curriculum, and it was replaced with this total focus on using drugs as a solution.”

Two of the wealthiest individuals of the time—John D. Rockefeller and Andrew Carnegie—funded the Flexner Report through their organizations, and Rockefeller contributed millions to the medical establishment.

For four generations, medical doctors have been taught to use the disease model of medicine, which excludes natural medicine, said Mercola.

“[Doctors are] just brainwashed with this perspective that drugs are the answer,” he said. “You learn to diagnose a constellation of symptoms with a disease label, and that disease label has a wide variety of drug options.”

In a paper about the impact of the Flexner Report, Dr. Thomas P. Duffy states that “American medicine profited immeasurably from the scientific advances that this system allowed, but the hyper-rational system of German science created an imbalance in the art and science of medicine.”

Although Mercola started his practice adhering to these hyper-rational medical practices of prescribing medication for every ailment, he soon realized there is a deeper and more holistic method of treatment, so he started integrating natural medicine and preventative care into his practice, which slowly flourished.

Besides natural treatment, anything that is contrary to the narrative the medical establishment and governments wants to push is censored, much like the early treatments for COVID-19, said Mercola.

The reason more physicians do not voice objections to irrational policies and mandates is the fear of losing their livelihoods, said Mercola.

“The majority of physicians in this country, they typically create so much debt when they’re going through medical school—maybe it’s a half a million dollars of debt would be a typical case—they are essentially slaves to a system,” said Mercola.

“But fortunately, there are a fairly significant number of brave and courageous physicians who’ve spoken up and frequently, at great threat to their health, their professional careers,” he said, mentioning Dr. Peter McCullough specifically.

Over the course of his career, Mercola has been labeled by Big Tech and some media outlets as “unscientific,” most recently for opposing the COVID-19 vaccine’s widespread use. But people can see the truth, Mercola said, and his business has flourished despite attacks.

“The website’s become so big,” he said. “And even with the censorship, we’re still the most visited natural health site in the world and have been for the last 20 years.”