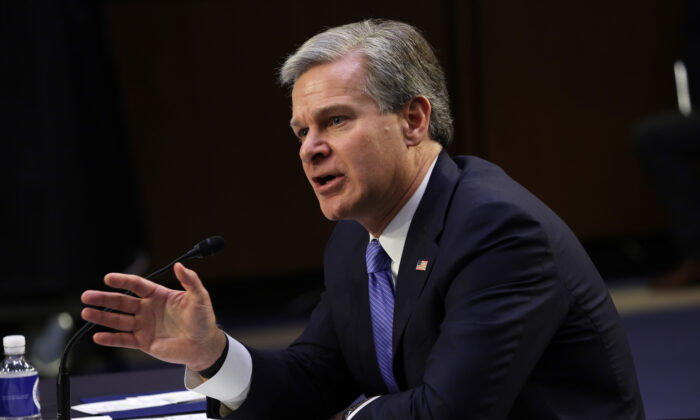 The FBI is examining how to improve its sourcing after failing to detect the potential for large-scale mayhem before the Jan. 6, 2021, breach of the U.S. Capitol, the bureau’s director said on Aug. 4.

While the FBI did put out various intelligence documents warning about the prospect of politically-motivated violence before the breach, “it is also the reality that we did not, I think, have any specific credible intelligence that point to thousands of people breaching the capital,” Director Christopher Wray said.

“And so one other things we are determined to do on our part, to make sure we can do our part to make sure that nothing like that ever happens again, is to see how we can go about developing better sources,” he added. “Anytime in the intelligence field where there is any kind of successful attack, we make a point in trying to figure out, are there better ways to develop sources, higher-quality sources, etc., so we’re doing that now.”

The bureau was tipped off about social media posts suggesting the potential for violence in Washington on Jan. 6 by companies like Parler and Facebook, while law enforcement partners also forwarded concerning messages before Congress convened to certify the electoral votes that day.

But the FBI “had no specific concerns” during a Jan. 2 meeting regarding the events scheduled in Washington, according to a Department of Defense Inspector General report, and Sen. Mark Warner (D-Va.) has said he was assured on Jan. 4 that the FBI was on top of the chatter.

The day before the breach, the FBI’s Norfolk, Virginia office shared a bulletin about the potential for violence in connection with the “Stop the Steal” protest, with one thread discussing specific actions such as breaking glass and kicking in doors at the Capitol so members of Congress could hear.

“Get violent….stop calling this a march, or rally, or a protest. Go there ready for war,” the thread stated.

Wray has said before that he was not informed of the bulletin until after the breach.

“That was a thread on a message board that was not attributable to an individual person,” Steven D’Antuono, the official in charge of the FBI’s Washington Field Office, told reporters in 2021.

The information was briefed within 40 minutes of receipt to law enforcement partners, he said. The U.S. Capitol Police were alerted, but a copy did not get in front of then-Capitol Police Chief Steven Sund, the former chief told members of Congress a month after the breach. Michael Stenger and Paul Irving, the former sergeants-at-arms for Congress, also testified that they did not see it.

Sund said the information was “raw data,” and that other intelligence didn’t indicate that a breach would occur, while Irving described officials as ill-prepared.

As of July 6, more than 855 people have been charged in relation to the breach in federal and District of Columbia courts.

Approximately 350 others who were involved in the mayhem have not been charged yet, Sen. Dick Durbin (D-Ill.) said, wondering why that was the case.

The FBI is still working on the matter, Wray said.

“In some instances, a lot of the initial people we were able to find and arrest and charge made themselves widely visibly and easily identifiable on social media or otherwise. but there were a certain number of people who concealed themselves more effectively, so part of it is a little more challenging to get those people identified. That’s part of it,” he said, adding later, “We are continuing to develop some of the more complicated parts of the investigation in terms of conspiracy charges.”

D’Antuono was the FBI agent in charge of the Detroit, Michigan field office while agents there were investigating a group that was ultimately charged with plotting to assassinate Michigan Gov. Gretchen Whitmer.

At least 12 FBI informants or agents were involved with the group, and defendants have said they were entrapped.

Federal charges were brought against some of the men, but two were acquitted in April, while a mistrial was declared for two others.

Sen. Ted Cruz (R-Texas) asked how many agents had been disciplined for taking part in the operation, which Wray declined to answer.

Crus then pointed out that D’Antuono was later promoted to head the Washington office, which Wray initially seemed to deny.

“The special agent in charge of that case has now been sent to D.C. … and now leads the investigation regarding Jan. 6, is that correct?” Cruz asked.

“That doesn’t sound right to me,” Wray said.

When Cruz named D’Antuono, Wray said he thought Cruz was talking about somebody else.

“I thought you were asking about the agent who was responsible for this,” Wray said.