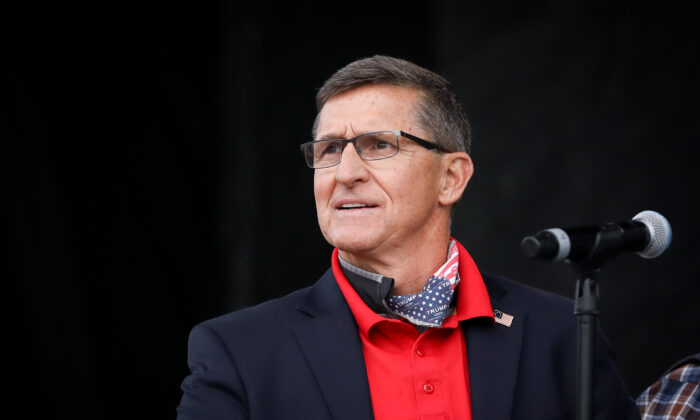 No evidence that requests from Biden, others to unmask Flynn were politically motivated, US attorney finds
By Zachary Stieber

The FBI distributed transcripts of calls between then-incoming national security adviser retired Lt. Gen. Michael Flynn and Russia’s ambassador to the United States without shielding Flynn’s name, according to a newly published report, which also found no evidence that requests from then-Vice President Joe Biden and other executive branch officials to unmask Flynn’s identity were politically motivated.

Flynn and the ambassador, Sergey Kislyak, spoke several times after Donald Trump was elected president in 2016. Flynn’s identity was made known, or unmasked, to a number of Obama administration officials, who requested the unmasking prior to Trump being sworn in. Portions of the transcripts were reported by The Washington Post before Trump’s inauguration, citing a “senior U.S. government official.” A later article cited nine current and former officials. All likely violated the federal code that prohibits disclosure of classified information.

Attorney General William Barr, a Trump appointee, in May 2020 tasked U.S. Attorney John Bash with reviewing the unmasking requests of Flynn and others, with the Department of Justice indicating the frequency and motivation for the unmasking appeared to be problematic.

Bash’s report was never made public but was published on May 31 by BuzzFeed News after the outlet obtained it through a Freedom of Information Act request.

Bash, another Trump appointee, said he examined whether any senior officials had obtained Flynn’s identity in connection with the calls through an unmasking request made ahead of Trump’s inauguration.

“The answer is no. According to the FBI, the Bureau did not disseminate an intelligence report discussing those communications and containing masked USPII for General Flynn before President Trump’s inauguration. For that reason, the public disclosure of the communications could not have resulted from an unmasking request,” Bash wrote. USPII stands for U.S. person identifying information.

“That conclusion is consistent with my review of unmasking records, which did not reveal any unmasking request corresponding to a report discussing those communications,” and was confirmed by other information, Bash added.

But the U.S. attorney, who resigned in October 2020, also said he learned that during the time when Trump was preparing to enter office that the FBI shared transcripts of the Flynn–Kislyak calls “outside of the Bureau without masking General Flynn’s name.”

“Evaluating that dissemination and determining how the information was provided to the media is beyond the scope of this review,” Bash said.

An FBI spokesperson told The Epoch Times in an email, “The FBI’s dissemination of information in intelligence products to other executive branch agencies is governed by policies and processes, which are periodically reviewed, and that ensure appropriate protections for privacy and identifying information.”

“The Obama team leaked partial Flynn transcripts to the media, the media printed them without context, the Obama team unmasked the name as if they hadn’t leaked it already,” former Acting Director of National Intelligence Richard Grenell, who reviewed the report, wrote on Twitter. Grenell declassified the list of officials who had asked for Flynn’s identity.

Former FBI Director James Comey told a congressional panel in 2017 that the bureau was charged with sharing information about Flynn’s talks with Kislyak with other government agencies. Comey said he passed the information to Director of National Intelligence James Clapper, with Clapper briefing President Barack Obama, Biden, and other senior officials.

“Our people judged it was appropriate, for reasons that I hope are obvious, to have Mr. Flynn’s name unmasked,” Comey said.

Former FBI Deputy Director Andrew McCabe later told the committee that he didn’t think Flynn’s name was ever masked, which would have made requests for unmasking “unnecessary.”

Flynn pleaded guilty to lying to the FBI about his contact with Kislyak, but the Department of Justice found the bureau did not have a “legitimate investigative basis” to interview Flynn and dropped the criminal case.

No Evidence Flynn Requests Made for ‘Improper Reasons’

The team reviewed records of unmasking requests and underlying intelligence reports, spoke with intelligence and other federal officials, and reviewed classified and unclassified transcripts of former senior officials testifying to Congress.

Bash said he didn’t uncover evidence that senior U.S. officials unmasked the identities of Flynn or other U.S. persons who were in intelligence reports “for political purposes or other inappropriate reasons” during the period of time in question.

“I did not find any basis to conclude that the requests were made for improper reasons,” Bash said. “Most critically, all but one of the requests that listed a senior official as an authorized recipient of General Flynn’s identity were made by an intelligence professional to prepare for a briefing of the official, not at the direction of the official.”

The FBI spokesperson said: “The FBI fully cooperated with the review conducted in 2020 by U.S. Attorney Bash. As explained in his report, Bash didn’t identify any improper action by the FBI and found that the FBI complied with applicable policies and processes in 2016 and 2017.”

Gen. Paul Nakasone, director of the National Security Agency (NSA), indicated in 2020 that Biden and others wanted Flynn’s identity, but they had others submit the actual requests because only certain personnel are authorized to make them. The NSA didn’t return a request for comment.

Bash noted that it would be hard to uncover abuse of the unmasking process because the legal standard that allows the identity of U.S. persons to be made known “is relatively easy for the most senior officials to satisfy,” while the NSA’s default position “means that many unmasking requests are clearly justified as an objective matter, even if secretly made for inappropriate reasons.”

“Unless the senior official ultimately takes some improper action with the USPII, such as leaking it to the press, it would be difficult to detect an inappropriate purpose for making a single unmasking request,” he said.

The first is that intelligence officials review communications and sift out all information on Americans that does not appear relevant to “foreign intelligence and national security objectives,” according to Bash, citing rules across the NSA, CIA, and FBI. That leaves relatively few Americans for which administration officials such as the vice president can request unmasking.

The second is that the bulk of the identities that remain in the reports were routinely revealed based on regular requests by staffers.

Presidents and some other senior officials on a daily basis receive what’s called the President’s Daily Brief, a document containing classified information collected by intelligence officials.

From at least 2015, briefers presenting the brief would ask intelligence agencies to unmask the identities of most Americans mentioned in documents contained in the brief, Bash found. The justification offered for the request was “typically no more than a boilerplate statement” that a briefer needed the identities for the morning briefing of a particular official.

“The request would usually then be granted that morning, sometimes in a matter of minutes. The requests were rarely denied,” Bash said.

Briefers for the attorney general, FBI director, CIA director, and director of national intelligence told Bash that asking for unmasking ahead of the briefings was standard operating procedure and, in some cases, was also done by their predecessors. Intelligence officials who selected reports for the U.S. ambassador to the United Nations said the procedure was actually given to them by their predecessors in writing, though the document was not able to be located.

An NSA official with 32 years of experience with the agency said the anticipatory requests by briefers had been done since 2008, if not earlier.

The director of the brief on March 23, 2017, ordered staffers to stop making the widespread requests. “That change was likely prompted by public discussion of unmaskings,” Bash said.

Grenell said that what took place was illegal.

“It’s illegal for briefers to share the name without a request,” he said. “That should be corrected.”

Bash said: “Despite finding no evidence of inappropriate unmasking requests, I am troubled by how easy it is for political appointees of the incumbent administration to obtain nonpublic information about individuals associated with a presidential campaign or a transition team. There exists a significant potential for misuse of such information—misuse that could be difficult to detect.”

He recommended intelligence agencies adopt stricter safeguards for unmasking requests relating to presidential campaigns or transitions, including implementing a higher standard for granting the requests.