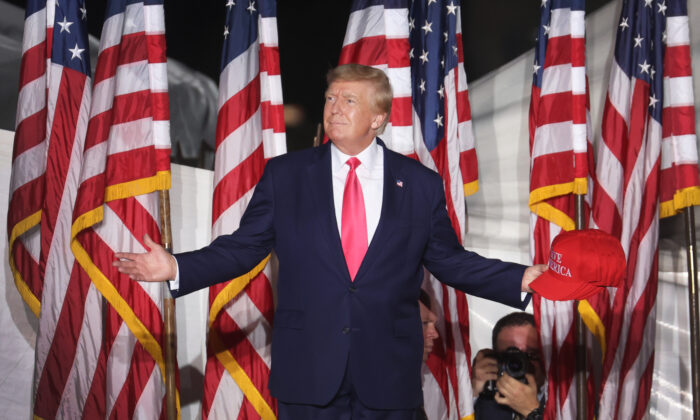 The ongoing probes targeting former President Donald Trump have done little to dampen his prospects for a presidential run in 2024, according to political analysts.

Despite a series of investigations, including a Department of Justice (DOJ) probe into whether Trump had mishandled classified documents after leaving office, Republican voters have made up their minds about Trump—which is unlikely to change unless something significant happens, the analysts said.

The affidavit that convinced a federal judge to greenlight a search warrant to be executed at Trump’s Mar-a-Lago home weeks earlier was released on Aug. 26. But most of the parts that explain the rationale for the search were redacted, leading to criticism from Trump and his allies that the Justice Department lacks transparency. The DOJ, however, has argued that the redactions are necessary to protect the integrity of the ongoing investigation.

“There’s one thing we know for sure: it’s that the left hates transparency,” Hogan Gidley, former White House deputy press secretary under the Trump administration, told The Epoch Times.

“They don’t want anyone to see behind the curtain as to what they’re actually doing,” he said. “If you put everything out on the table, you’ll get to see the truth and reality of what the FBI wanted at Mar-a-Lago or what they claimed to have wanted.”

Such skepticism is likely a prevailing sentiment among many Trump supporters following the release of the FBI affidavit, analysts said.

“I don’t think that Trump supporters will be swayed by this at all,” Jacob Neiheisel, a political campaign expert who teaches political science at the University of Buffalo, told The Epoch Times.

“If anything, the perception that Trump is being targeted by the “deep state” may push them to double down in their support for him,” he said, referring to the idea that a group of powerful bureaucrats secretly influence policy in Washington.

Swing voters, Neiheisel said, may change their views based on “the major thrust of the media narrative surrounding” the affidavit, but even this could be difficult.

“It is doubtful that many persuadable voters are paying a lot of attention right now,” he said, adding that the details of the case so far are “somewhat arcane—not unlike the first Trump impeachment case.”

Federal agents took more than two dozen boxes of materials on Aug. 8 from Mar-a-Lago. The documents include 11 sets of documents bearing various classified markings including “top secret,” “secret,” or “confidential,” according to a property receipt made public on Aug. 18.

Lawyers for Trump have complained about the lack of detail regarding what was removed from the premise, a reason they have pleaded to have a third-party adjudicator, known as a “special master,” to review the trove before the government does so that no privileged information is revealed.

The affidavit released on Aug. 26, with 20 of 38 pages either partially or fully blacked out, has offered little help to quell questions.

“The American people deserve transparency and not an outrageously, heavily-redacted affidavit to cover up for and politically protect Joe Biden and the FBI for this dangerous and un-American overreach,” Rep. Elise Stefanik (R-N.Y.) told The Epoch Times. “This is yet another reason why the American people do not trust these agencies.”

Gidley thought the same on the effect of the affidavit.

“It’s so heavily redacted—I don’t know that that sways opinion one way or the other, except to continue to foment anger,” he said.

The Epoch Times has reached out to the Justice Department for comments.

It’s unclear how many undecided voters might have been turned off by the string of probes Trump is facing, but within the GOP base, the recent developments have largely worked in Trump’s favor, analysts said.

In the days after the FBI search of Mar-a-Lago, Trump’s political action committee raised millions from supporters, according to media reports.

“The FBI raid energizes both bases of the parties. The Democrats think that they are going to be able to prosecute him on this. Republicans feel like this is a politically motivated, weaponized investigation, and they don’t think it’s going to go anywhere,” Brendan Steinhauser, a Republican political strategist and partner at the Texas-based political communications firm Steinhauser Strategies, told The Epoch Times.

Trump has teased multiple times about his 2024 presidential ambitions, stopping just short of formally announcing a bid for reelection. But his political clout in the GOP base has been hard to ignore: out of the more than 200 Republicans Trump endorsed, more than 90 percent have scored a win in the primary elections.

“If nothing happens, Cheney loses probably maybe 30 percentage points. She ends up losing by 37, and I think that extra seven to 10 points that she lost by was probably the result of energized Republicans coming out to support Trump by voting against her,” Coker told The Epoch Times.

The analysts believe that Trump will be the GOP nominee with few challenges if he decides to run. But if he does, it might be wise for him to hold off from making the announcement until after November.

“I would say let the Democrats be the focus of this campaign. That will only help Trump in the future,” said Steinhauser.

By endorsing candidates in state and federal races across the country, Trump is building allies who can come to his aid when the time is right, Steinhauser said.

“He can afford to wait,” he said. “There’s never a compelling reason for someone who’s that strong of a front runner to jump in this early.”

Announcing candidacy has its downsides: it could create legal restrictions on the donations Trump has raised and prevent him from using the money to help other candidates, Coker noted. The resulting media attention could also distract Republicans from focusing on key issues to help advance its midterm campaign, which Coker identified as the economy, immigration and crime.

“Part of the danger is if he jumps into the race before the midterms, the Democrats will make him the issue. It’ll be a question every candidate running, every Republican candidate, is going to be asked, which is: ‘are you supporting Trump for president?’” he said. “They shouldn’t have to be put on the spot about that this early.”

But if the FBI raid seems unlikely to weaken Trump’s prospects for the Republican primary, what will come out of the general election in 2024 is less certain.

“There is an eternity between now and 2024 general,” said Neiheisel.

“I don’t see this episode unfolding in a way that earns him many supporters going forward. Although it is far from impossible, it is very tough to win at the national level just by keeping your base together,” he added.

The strength of Trump’s sway has nonetheless surprised Steinhauser, who has been observing the voter sentiments in the past several years. Despite the negative media focus on the Jan. 6 investigations and other looming legal troubles, are “still right there with him.”

Nothing short of a release of the full affidavit or an indictment against Trump would change the dynamic, the analysts predicted.

“Everybody’s in a holding pattern to wait and see what the government has,” said Coker. “If it’s something that’s going to turn people’s heads, the whole game changes.”

“They’re keeping their head close to the vest and, you know, maybe they have a silver bullet, and they’re just waiting to use it.”