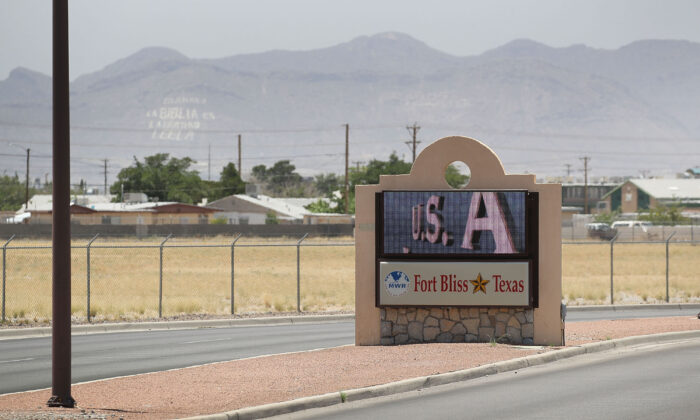 An entrance to Fort Bliss in Fort Bliss, Texas, on June 25, 2018. (Photo by Joe Raedle/Getty Images)
Crime and Incidents

The FBI has confirmed that it’s investigating an alleged assault on a female U.S. military service member at a facility in New Mexico that houses Afghan refugees.

In an emailed statement to The Epoch Times, the agency said its El Paso office is investigating the incident after receiving a referral from officials at Fort Bliss, Texas.

The alleged assault took place at a camp on the New Mexico side of the Fort Bliss facility known as the Doña Ana Complex, which is being used to house Afghan evacuees.

A spokesperson for the 1st Armored Division at Fort Bliss told The Hill in a statement that a female service member reported being assaulted by “a small group of male evacuees” while at the Doña Ana facility on Sept. 26.

“The safety and well-being of our service members, as well as all of those on our installations, is paramount. We immediately provided appropriate care, counseling, and support to the service member,” the spokesperson said, according to the report.

Additional safety measures have also been implemented, including more lighting and additional health and safety patrols, according to the report. The Doña Ana Complex was converted into a camp for refugees evacuated from Afghanistan following the Taliban takeover of the country.

Earlier in September, Rep. Yvette Herrell (R-N.M.) led over 40 of her congressional colleagues in penning a letter to President Joe Biden (pdf) expressing “grave concern about the rushed and incomplete vetting of Afghan evacuees being brought to the United States.”

In a tweet reacting to the incident, Herrell offered her sympathies to the female service member.

“My prayers are with the courageous soldier and her family. This is yet another tragic failure in the vetting process for Afghan nationals. The American people deserve answers,” Herrell said in the tweet.

In the earlier letter to Biden, Herrell called on him to provide details about the vetting process used to screen Afghan refugees coming into the United States.

“To be abundantly clear, the United States should honor its promises to help Afghan nationals and their families who have risked their lives to support U.S. and Coalition forces, applied for the Special Immigrant Visa (SIV) program, and are now fleeing the Taliban,” the letter states.

“Nonetheless, there are substantial and concrete concerns that in the course of your calamitous withdrawal of troops and evacuation efforts in Afghanistan, some individuals may have made their way into the country who are terrorists or have terrorist intent, are convicted violent criminals, or are otherwise dangerous persons.”

Secretary of Homeland Security Alejandro Mayorkas told CBS News earlier in September that Afghan nationals were vetted before arriving in the United States.

Asked if he can guarantee that the Taliban and those on terror watch lists were not making their way into the United States, Mayorkas said, “I can guarantee you that we are doing everything possible to make sure that they don’t. And we have no evidence that they have.”

News of the FBI investigation into the alleged assault at the Doña Ana Complex follows the recent arrests of two Afghan evacuees at Fort McCoy, a military base in Wisconsin. A federal grand jury in Wisconsin indicted the pair in unrelated cases.

Bahrullah Noori, 20, faces charges that include three counts of engaging in a sex act with a minor, with one count alleging the use of force. Mohammad Haroon Imaad, 32, is charged with assaulting his spouse by strangling and suffocating her.