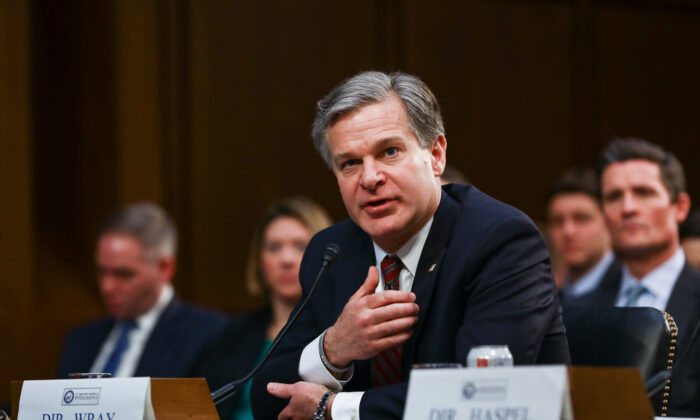 FBI Director Christopher Wray testifies at a hearing in front of the Senate Intelligence Committee in Congress in Washington on Jan. 29, 2019. (Charlotte Cuthbertson/The Epoch Times)
Politics

FBI Director Christopher Wray has apologized to the Foreign Intelligence Surveillance Court (FISC) for the way it conducted surveillance of former Trump campaign adviser Carter Page during the 2016 election.

The FBI headquarters instructed the New York field office to open a counterintelligence investigation into Page shortly after he joined Trump’s campaign, according to details from a report released in December last year by the Department of Justice (DOJ) Office of Inspector General (OIG).

The bureau believed he was “collaborating and conspiring with the Russian government” at that time, a claim which he repeatedly denied and that has proven to be untrue by Special Counsel Robert Mueller’s lengthy investigation.

In a court filing (pdf) made public on Jan. 11, Wray expressed “deep regret” over the bureau’s errors and outlined steps that it is taking to ensure it doesn’t make the same mistakes again.

“The FBI has the utmost respect for this court, and deeply regrets the errors and omissions identified by the (OIG Office of the Inspector General)” Wray wrote in the letter, before describing the agency’s conduct as “unacceptable and unrepresentative of the FBI as an institution.”

“FISA is an indispensable tool in national security investigations, and in recognition of our duty of candor to the court and our responsibilities to the American people, the FBI is committed to working with the court and DOJ to ensure the accuracy and completeness of the FISA process.” he added.

Wray said in his letter to FISC, the secret court that handles national security investigations, that he has ordered more than 40 corrective actions, 12 of which are specific to the FISA surveillance application process, to ensure the bureau doesn’t make the same mistakes again.

They include a new verification form to certify the accuracy of information from informants, a new checklist for agents to fill out when seeking FISA approval for surveillance to better inform the court of all relevant information, and new training to reemphasize the importance of accuracy and thoroughness in all FISA applications.

Wray ordered that the training program be created by April 30 and is requiring that all agents and lawyers who staff FISA complete it by June 30.

“I am determined that operational personnel understand, holistically, what occurred during the activities reflected in the [inspector general’s] report, and that, in addition, personnel working on FISA applications understand the importance of rigor during each and every phase of the application process,” he wrote.

His letter comes after a report (pdf) released on Dec. 9 from the Justice Department inspector general found 17 serious “inaccuracies and omissions” in the FBI’s request to wiretap Trump’s 2016 presidential campaign volunteer Carter Page.

The report ordered the FBI to respond to its findings with a plan on how it will address the problems that had been identified.

President Trump, who has accused the FBI of launching an unwarranted probe into his campaign, responded to Wray’s letter to the courts on Twitter on Jan. 11, and appeared to signal that he wanted more than just an apology.

“FBI Director apologizes for FISA Errors (of which there were far to many to be a coincidence!). @FoxNews Chris, what about all of the lives that were ruined because of the so-called ‘errors?’ Are these ‘dirty cops’ going to pay a big price for the fraud they committed?” he wrote.