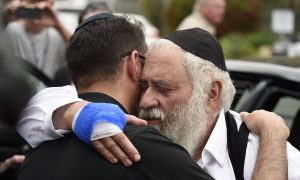 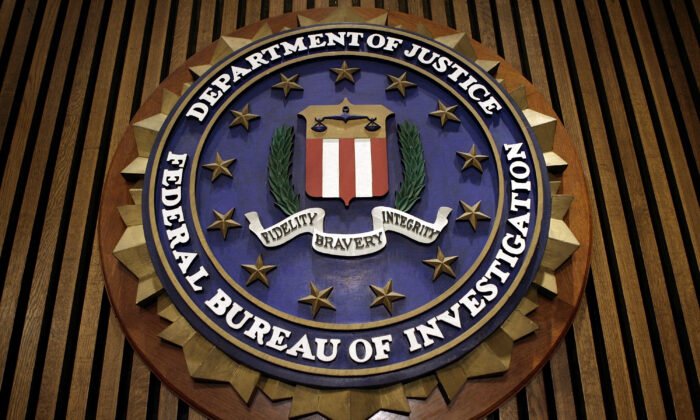 The seal of the F.B.I. hangs in the Flag Room at the bureau's headquaters March 9, 2007 in Washington, DC. F.B.I. Director Robert Mueller was responding to a report by the Justice Department inspector general that concluded the FBI had committed 22 violations in its collection of information through the use of national security letters. The letters, which the audit numbered at 47,000 in 2005, allow the agency to collect information like telephone, banking and e-mail records without a judicially approved subpoena. (Chip Somodevilla/Getty Images)
US News

FBI officials have charged a 27-year-old white supremacist who was allegedly planning to bomb the Temple Emanuel Synagogue in Colorado, it was announced on Nov. 4.

A statement by the Department of Justice says Richard Holzer of Pueblo, Colorado, was arrested after allegedly informing undercover FBI agents he was planning to use explosive devices to target the temple, which is the state’s second-oldest synagogue.

Holzer, who identifies as a skinhead and white supremacist, reportedly visited the Jewish temple a number of times to observe its members and scope it out.

According to the affidavit in support of the complaint obtained by CBS News, Holzer used several Facebook accounts to promote white supremacy ideology and acts of violence.

On Sept. 2, he told one Facebook user: “I wish the Holocaust really did happen … They need to die.”

Other posts from his accounts show him posing with weaponry and making threatening comments towards Jewish people, suggesting that he will “kill them.”

Holzer was approached by undercover FBI agents through Facebook in late September, according to the affidavit.

The young man allegedly told the agents that he had previously paid a Mexican cook to “hex and poison a local synagogue” using arsenic, however the FBI did not have any evidence to suggest this had occurred.

Holzer also sent agents videos of himself urinating in front of a Jewish center, along with other footage of Nazi propaganda and weaponry, and gifted the agents with white supremacist paraphernalia, court documents show.

He allegedly told the FBI agents who were posing as fellow white supremacists that he wanted to show Jewish people within the community that they were “not welcome” in Pueblo, and they should “leave or they will die.”

The young man repeatedly expressed his hatred towards the Jewish community and his support for “Racial Holy War” (RAHOWA), a term often used among white supremacist groups signifying the battle they believe will pit them against minority races such as Jews and other non-whites, ultimately leading to an Aryan rule, the documents also detailed.

Holzer allegedly went on to suggest using explosive devices to destroy the synagogue and “get that place off the map” when meeting with undercover agents and coordinated with them to obtain explosives.

The undercover agents provided Holzer with dummy explosive devices, including two pipe bombs and 14 sticks of dynamite that had been fabricated by the FBI.

He allegedly planned to detonate them several hours later in the early hours of the morning on Nov. 2 but was arrested by agents.

The FBI conducted the investigation with the assistance of the Pueblo Police Department and Pueblo County Sheriff’s Office, according to the statement.

Holzer has been charged with intentionally attempting to obstruct persons in the enjoyment of their free exercise of religious beliefs, through force, and the attempted use of explosives and fire.

He is currently in federal custody and faces a maximum sentence of 20 years in prison if convicted.

The RAHOWA ideology stemmed from American white supremacist and neo-Nazi leader, Matt Hale, according to The Washington Examiner.