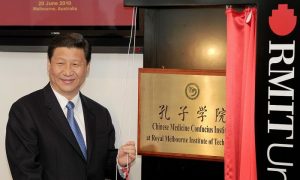 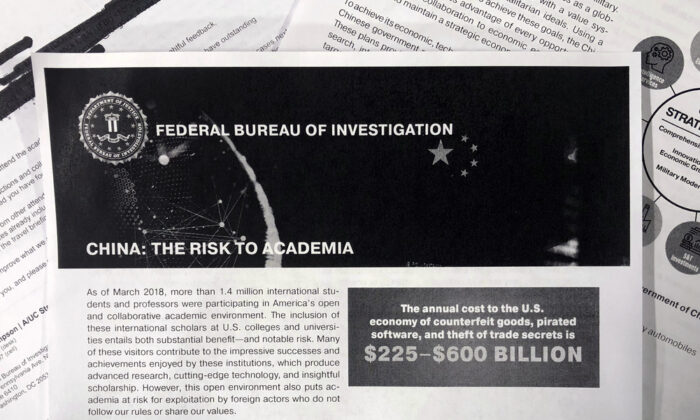 U.S. authorities are reaching out to colleges and universities across the United States as part of a wide-reaching campaign to stem the wholesale theft of technology and trade secrets by researchers tapped by China, according to emails obtained by The Associated Press.

The emails, obtained through records requests to public universities in 50 states, highlight concerns of the vulnerabilities of universities that recruit foreign talent, who often are involved with cutting-edge research.

FBI agents, as part of the campaign, have given lectures at seminars, briefed administrators in campus meetings, and distributed pamphlets warning of trade secret theft. It comes as the administration is cautioning its allies over concerns that the Chinese tech giant Huawei is a security threat.

Republicans have been introducing legislation that would seek to protect U.S. universities from the theft of sensitive information by foreign nations such as China, Russia, Iran, and North Korea.

Messages obtained by AP show that in the past 16 months, FBI agents have requested the emails of two University of Washington researchers, asked Oklahoma State University if it has scientists in specific areas, and sought updates about “possible misuse” of research funds by a University of Colorado–Boulder professor.

The emails show administrators mostly embracing FBI warnings, requesting briefings for themselves and others. But they also reveal some struggling to balance legitimate national-security concerns against their own eagerness to avoid stifling research or tarnishing legitimate scientists.

“Existentially, we look at China as our greatest threat from an intelligence perspective, and they succeeded significantly in the last decade from stealing our best and brightest technology,” William Evanina, the U.S. government’s chief counterintelligence official, told AP.

Beijing denies that it’s stolen trade secrets from U.S. corporations to further its own economy.

A bill, dubbed the “Protect Our Universities Act of 2019” and introduced by Rep. Jim Banks (R-Ind.) on March 12, would establish a Department of Education-led interagency task force to address the vulnerabilities currently present on college campuses across the nation.

The task force would manage a list of “sensitive research projects” that have links to the Commerce Control List, and the U.S. Munitions List. It would also manage other “foundational principles developed for advanced military technologies.”

The FBI’s efforts also coincide with restrictions put in place by other federal agencies, including the Pentagon and Energy Department, that fund university research grants. The National Institutes of Health has sent dozens of letters in the past year warning schools of researchers it believes may have concealed grants received from China, or improperly shared confidential research information.

In the past two months alone, a University of Kansas researcher was charged with collecting federal grant money while working full time for a Chinese university, a Chinese government employee was arrested in a visa fraud scheme that the Justice Department says was aimed at recruiting U.S. research talent, and a university professor in Texas was accused in a trade secret case involving circuit board technology.

A Senate report released in February by Permanent Subcommittee on Investigations Chairman Rob Portman (R-Ohio) and ranking member Sen. Tom Carper (D-Del.) stated that the Beijing-backed Confucius Institutes on American campuses should be closed if no major changes in their operations occur.

China has claimed that the aim of their Confucius Institutes are purely to strengthen Chinese-language learning, with the program growing to more than 1,600 universities and schools around the world. But it has been facing increasing scrutiny globally over risks ranging from violations of human rights to loss of academic integrity and freedom, and even potential infringements on national security.

The 93-page bipartisan report pointed to the language and culture at the institutes as a threat to academic freedom and said that many U.S. colleges have failed to disclose money received from the CCP, despite guidance from the Education Department that foreign gifts be reported.

More than $158 million has been provided by China to U.S. schools in order to run these Confucius Institutes, according to U.S. Senate investigators.

In Australia, some state education departments are considering banning the program from their public schools, following other states that have already done so.

Daniel Wild, director of research at the Institute of Public Affairs, told The Epoch Times last month that Australia should shut every Confucius Institute in the country.

“I think that it should be closed both at schools and universities,” Wild said. “That doesn’t mean that Chinese history and culture can’t be taught in Australia. But the concern is really where’s the money coming from and how is that influencing the content of their teaching?