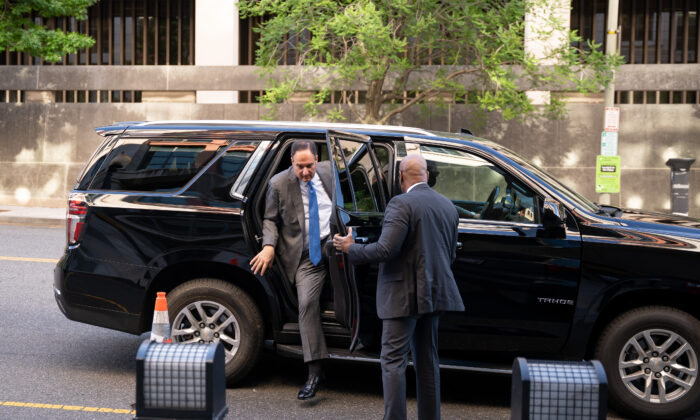 A lawyer representing Democrats proposed alterations to an FBI statement on the hacking of the Democratic Congressional Campaign Committee (DCCC) to avoid undermining the narrative from his clients, according to emails released as part of the trial of former Hillary Clinton campaign attorney Michael Sussmann.

FBI officials in mid-2016 were drafting a statement regarding an alleged intrusion into the DCCC network and sent the draft to Sussmann, a lawyer representing the DCCC, the Democratic National Committee (DNC), and other Democrats.

Jim Trainor, assistant director for the FBI Cyber Division, wrote to Sussmann on July 29, 2016: “Michael—our press office is once again getting a ton of calls on the DCCC matter. A draft response is provided below. Wanted to get your thoughts on this prior to sending out.”

Sussmann zeroed in on the first sentence, which he said seemed to undermine what the DCCC was saying about the reported intrusion.

“We try to really limit what we see and not acknowledging too much but the below edits are fine and we will send out,” Trainor said.

The bureau ended up using language similar to that offered by Sussmann, telling news outlets that it was “aware of media reporting on cyber intrusions involving multiple political entities, and is working to determine the accuracy, nature, and scope of these matters.”

The emails were introduced as exhibits during Sussmann’s trial and obtained by The Epoch Times. Sussmann was acquitted on May 31 of lying to the FBI.

According to notes taken by then-CIA Director John Brennan, President Barack Obama received a briefing on July 28, 2016—one day before Sussmann’s email to Trainor. Brennan told Obama of an intelligence intercept showing that Russia was aware of a plan approved by Clinton to “vilify” her rival, Donald Trump, by “stirring up a scandal claiming interference by the Russian security services.”

Days later, the CIA informed the FBI of intelligence suggesting that Clinton’s plan was meant “as a means of distracting the public from her use of a private email server.”

According to the indictment of several Russian nationals brought by special counsel Robert Mueller, the alleged Russian conspirators gained access to the DCCC network on April 12, 2016. That same day, then-FBI Director James Comey held a meeting with senior FBI officials to discuss how to execute a “credible … conclusion” of the FBI investigation into Clinton’s use of an unauthorized private email server to conduct government business.

The DCCC and the DNC hired CrowdStrike, a private cybersecurity firm, to investigate and remediate the network intrusions. The FBI conducted its own investigation, relying on server images and reports produced by CrowdStrike, with Sussmann playing as the singular point of contact representing the DNC and the DCCC, according to another email introduced during the trial.

The CrowdStrike reports sent to the FBI were partly redacted. An email addressed to Sussmann by an FBI agent indicated that receiving the nonredacted versions of the reports was the top priority for the bureau. According to a previous filing by the Department of Justice in the case against Trump associate Roger Stone, the bureau never received the unredacted reports. The FBI has rejected Freedom of Information Act requests for the documents.

Other missives entered during Sussmann’s trial showed the lawyer becoming upset after the bureau announced that it was investigating the reported intrusion into the DNC network.

Sussmann messaged Trainor, questioning the “significance of this announcement” and requesting the bureau consult with him before making public statements about the DNC case.

Trainor apologized, agreeing that when the FBI makes statements “we need to be in lock step with victims and partners.”

Trainor said the statement was an attempt to “respond in a more authentic way” and that the bureau intended to “be equally cooperative partners as we navigate this matter.”

“Thank you for that explanation. You can understand how the statement was confusing to us,” Sussmann said. “Please try to keep us informed if the FBI says anything else publicly about its investigation.”

Sussmann was the FBI’s point of contact on the investigations into the intrusions into the DCCC and DNC network, according to an email that FBI agent Jennifer Frasch sent in August 2016.

Sussmann was close to the FBI for years and had a badge that allowed him access to the bureau’s headquarters. Sussmann used the badge to gain entry on Sept. 19, 2016, when he handed over sketchy allegations against Trump to FBI lawyer James Baker.