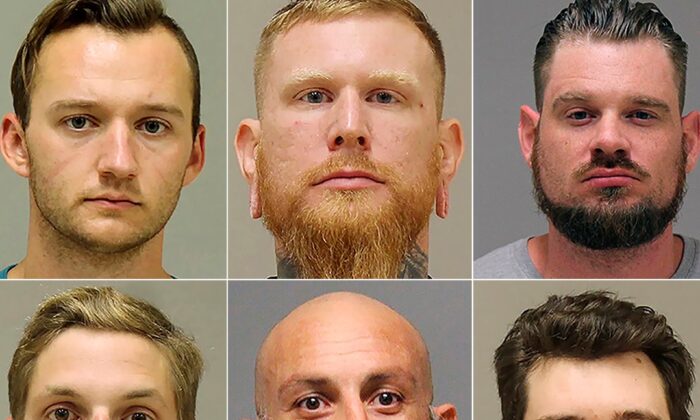 The misconduct of three FBI agents who investigated the alleged Michigan governor kidnapping plot won’t be used as evidence in court, a U.S. district judge has ruled.

With their March 8 trial fast approaching, defendants Adam Fox, Barry Croft, Kaleb Franks, Daniel Harris, and Brandon Caserta filed numerous motions in recent weeks to buttress their argument that the FBI entrapped them in a scheme to kidnap Michigan Gov. Gretchen Whitmer. But the defendants faced a severe blow to their case when U.S. District Judge Robert Jonker made a Feb. 2 order largely siding with government.

One of the defendants’ strategies was to bring to the jury’s attention the misconduct of the FBI agents who investigated them. One FBI agent in the Whitmer case was fired from the bureau after beating his wife, another agent has been accused of perjury in a separate case, and a third was pulled from testifying in the trial after it was revealed that he was operating a private intelligence business while investigating the defendants.

Judge Jonker said an FBI agent assaulting his wife was irrelevant to the kidnapping case. He made a similar statement about the agent accused of perjury in another matter.

“The issues referenced in the complaint against the agent inherently involve mixed questions of fact and law, and the Court sees little that is probative of a character for truthfulness,” the judge said. “What little value there is in the evidence is substantially outweighed by the chance of confusing the jury, and needlessly lengthening trial into a minitrial on public perceptions of the FBI.”

As for the FBI agent who operated a private intelligence business during the investigation, Judge Jonker said there was no conflict of interest in the arrangement.

“There’s no indication from the proposal that [the FBI agent] is trying to leverage his existing role as FBI agent, or the resources of the FBI more broadly, in any way. [The evidence] presents a broader picture that suggests a desire to grow into a full-scale business—but only after Chambers leaves the FBI. In fact, [the evidence] reflects to his potential capital source that he’s already worked to make sure the FBI’s work will not be disrupted by his departure,” Jonker said.

“Overall, the relevance of these materials and the subject matter they pertain to is minimal, if any.”

Jonker also ruled against defendants’ motion to admit as evidence 258 statements, largely comprising text messages and audio recordings. Such statements would generally be considered hearsay, and inadmissible as evidence in court, but the defendants argued that the statements should be allowed because they provide a fuller context of the events leading up to their arrest.

For instance, there are text messages between the alleged co-conspirators that say things such as “no snatch and grab I swear to [EXPLETIVE] God,” and “not cool with offensive kidnapping.”

But Judge Jonker said this can’t be entered into evidence without cross-examining the person who made a given statement.

“Statements about ‘No Snatch and Grab. I swear to [EXPLETIVE] God,’ or ‘not cool with offensive kidnapping’ express beliefs about particular means of responding to government action the defendants found offensive or improper,” the judge said. “Their relevance depends on the truthfulness and reasons for such stated beliefs, and preferences and the particular time and context in which they were uttered. All that calls for normal cross-examination, not trial by hearsay.”

Judge Jonker did grant the defendants’ motion to enter as evidence statements made by FBI agents, though he said he’s not sure how relevant some of the statements are.

“The Court believes the statements of the government agents, made within the scope of their duties as FBI agents on a matter within the scope of their official duties, are admissible for the defense. Relevancy, again, is a separate issue, and the government says there is good reason to believe statements made to informants are irrelevant to an entrapment defense, or for any other purpose,” he said

“And to the extent some of the agents’ statements might come in, the government says [the law] may be implicated to prevent the jury from coming away with a misleading impression.”