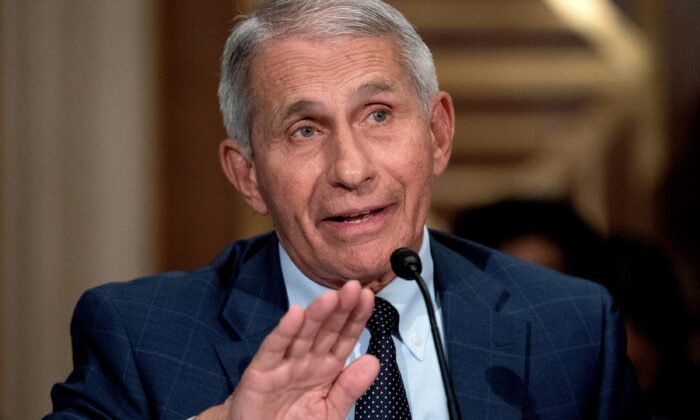 Dr. Anthony Fauci is seen at a hearing at the Dirksen Senate Office Building in Washington on July 20, 2021. (Stefani Reynolds/Pool via Reuters)
Executive Branch

Fauci: Too Soon for COVID-19 Lockdowns Over ‘Omicron’ Variant

White House COVID-19 adviser Anthony Fauci, in a series of Sunday morning interviews, suggested that little is known about the new so-called Omicron variant but said it’s not the time yet for lockdowns.

During an ABC News interview, Fauci said the United States must do “anything and everything” to curb cases of the variant, although it’s “too early to say” whether we need new lockdowns or vaccine mandates.

The variant, which was labeled by the World Health Organization (WHO) as a “variant of concern” on Friday, appears to be prompting panic among world leaders and has led to travel bans to southern Africa. It’s not clear yet if the CCP (Chinese Communist Party) virus variant is more infectious or can lead to more severe disease, as health officials have said that more data is required to make such a determination.

Fauci, while speaking to “Meet the Press” on Saturday, stated it was possible that it was already in the United States. No official case has been confirmed yet.

A day later, Fauci acknowledged that it’s unlikely that various campaigns that have been initiated by the federal government or other world leaders will eradicate the virus altogether.

“I mean, we’ve heard people say, understandably, they’re trying to look for a metric to give to the public that we’re going to have to start living with COVID,” Fauci, the public face of the federal government’s COVID-19 response, told CBS News on Sunday morning.

Meanwhile, the United States is slated to impose a travel ban on Nov. 29 on eight southern African nations, following restrictions imposed by European Union countries, the UK, Israel, and others.

On Saturday, Republicans criticized the travel ban—which was reportedly approved by Fauci—suggesting that it’s pointless to wait until Nov. 29 in order to impose such a restriction because it’s likely the variant is already in the United States.

“Joe Biden and Tony Fauci push crushing restrictions on Americans—like masking two-year-olds—that are pointless,” Cotton wrote Saturday. “But when it comes to targeted travel bans to protect American citizens, it’s nothing but incompetence and half measures from this White House.”