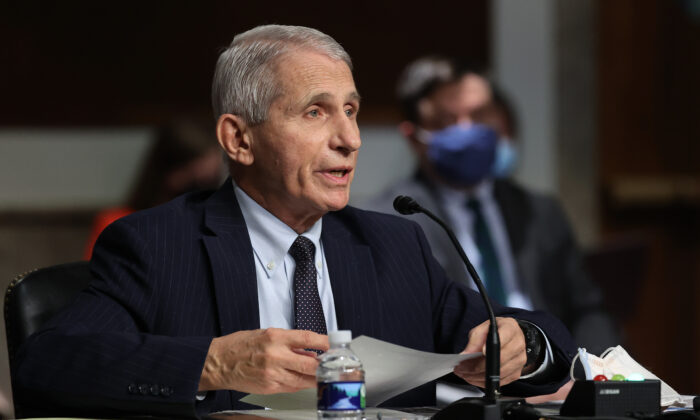 Dr. Anthony Fauci, the head of the National Institute of Allergy and Infectious Diseases, testifies to a Senate panel in Washington on Nov. 4, 2021. (Chip Somodevilla/Getty Images)
Executive Branch

Dr. Anthony Fauci, the White House’s chief medical adviser, said on Dec. 5 that the Biden administration is reevaluating travel bans it has put in place in an effort to stem the spread of the Omicron variant of COVID-19.

Speaking on CNN’s “State of the Union,” Fauci said the administration feels “very badly” about the impact caused by the travel restrictions imposed on South Africa and a handful of other neighboring countries.

“We all feel very badly about the hardship that might have put upon not only South Africa, but the other African countries. And for that reason, in real-time, literally, on a daily basis … we’re reevaluating that policy,” Fauci said.

The new variant was first detected in South Africa last month and has sparked concern among scientists owing to its high number of mutations and the fact that it appears to spread rapidly.

In response, dozens of countries around the world including Australia, Brazil, Canada, Iran, Japan, Thailand, the United States, and European Union countries subsequently closed their borders or imposed restrictions on a slew of southern African countries.

Fauci said the travel restrictions imposed on the country were purely a preemptive measure and gave the administration time to assess the situation.

“That ban was done at a time when we were really in the dark. We had no idea what was going on, except it does seem to have been an explosion of cases of Omicron in South Africa,” Fauci said on Dec. 5. “So when the ban was put on, it was put to give us time to figure out just what is going on.”

“Now as we’re getting more and more information about cases in our own country, and worldwide we’re looking at that very carefully on a daily basis, hopefully, we’ll be able to lift that ban within a quite reasonable period of time.”

As of Dec. 6, U.S. citizens and foreign nationals arriving in the United States are also required to present a negative CCP (Chinese Communist Party) virus test performed within 24 hours of departure, a change from the previous three days allowed for vaccinated travelers.

“We have the instruments to have safe travel. Let’s use those instruments to avoid this kind of, allow me to say, travel apartheid, which I think is unacceptable,” Guterres said, according to Reuters.

Meanwhile, the World Health Organization (WHO) last month criticized the “heavy burdens” that travel bans place on southern African nations and urged countries across the globe not to impose flight bans unless they are “scientifically based.”

In a statement, the public health agency called on countries to “follow science and the International Health Regulations” instead of rushing to impose flight bans, which, the agency said, can drastically affect the livelihoods of people in southern Africa.

As of yet, no deaths have been associated with the Omicron strain, which was described as a variant of concern by the WHO in late November.