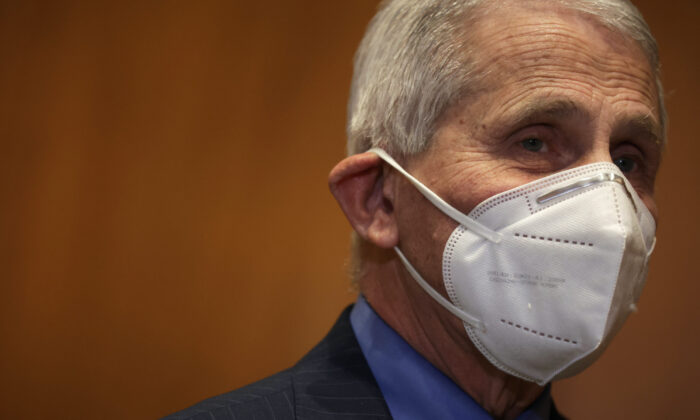 Dr. Anthony Fauci, director of the National Institute of Allergy and Infectious Diseases and chief medical adviser to U.S. President Joe Biden, during a hearing in Washington on May 17, 2022. (Alex Wong/Getty Images)
AMERICA

Dr. Anthony Fauci this week urged people to vote out members of Congress who are spreading “total lies” about COVID-19, but made a false claim himself about COVID-19 vaccines.

Fauci, speaking at the Fred Hutchinson Cancer Center in Seattle on Aug. 9, was asked how the scientific community can deal with congressional leaders “who promulgate unscientific ideas yet control funding for public institutions.”

In commencement speeches he’s given this year, Fauci urged graduates, “Don’t accept the normalization of untruths.”

“Because there’s so much preposterous lying that goes on, and including, unfortunately it’s true … that members in our own Congress, in our own Senate, who just get up and say things that are total lies,” added Fauci, the longtime head of the National Institute of Allergy and Infectious Diseases (NIAID). “‘Vaccines kill people, that kind of thing.’ It’s so much untruths that people who have a lot of other things in their lives that they have to worry about, they kind of start accepting it and all of a sudden, lying becomes normal.”

Vaccines do kill people, according to U.S. health authorities.

Nine deaths from a combination of blood clotting and low blood platelet levels, for instance, have been determined to be “causally associated” with Johnson & Johnson’s COVID-19 vaccine, according to the Centers for Disease Control and Prevention (CDC). Causally associated means the vaccine caused or was related to the deaths.

Severe allergic reactions are also triggered on occasion by the Pfizer and Moderna COVID-19 vaccines, as are cases of heart inflammation. People who have experienced the conditions have died.

Paul and Fauci have clashed during Senate hearings over Fauci’s agency funding the Wuhan, China, laboratory located near where COVID-19 cases were first detected, and Republicans have vowed to investigate Fauci if they gain control of Congress in the upcoming midterm elections. Paul’s office didn’t respond to an inquiry.

Fauci wasn’t questioned on his own prior statements, including his admission that he misled the U.S. public on the effectiveness of masks in order to prevent a shortage of masks for health care workers.

The cancer center awarded Fauci with the 2022 honorary Hutch Award, which he received during a baseball game at T-Mobile Park. The discussion took place hours before the game.

At one point during the discussion, Corey started talking about how an early strain of the virus that causes COVID-19 was detected in Washington state, and Fauci joked, “I developed the ancestral modern strain.”

“I created it. I was in my kitchen,” Fauci said, drawing laughter.

“Gain of function, here we come,” Corey said, before moving on to another subject.

Gain of function is a term that describes research to make pathogens more transmissible or pathogenic.

Fauci has insisted that U.S.-funded research in China was not gain of function, but outside experts have said the research clearly met the definition of the term.

“Families of the more than 1 million Americans who have perished from COVID-19 aren’t laughing,” Sen. Roger Marshall (R-Kan.), one of Fauci’s fiercest critics in Congress, wrote on Twitter in response to a clip of the new exchange.