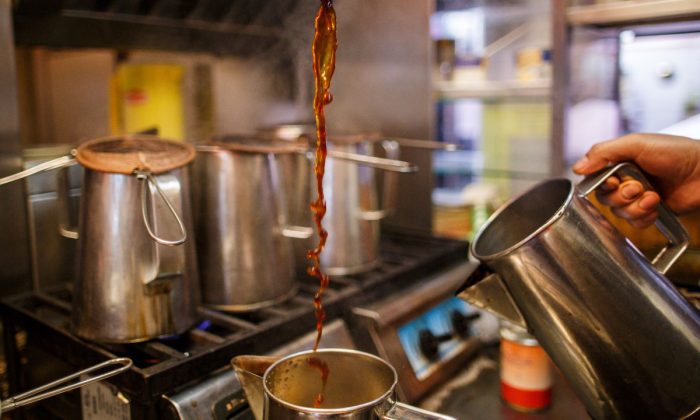 A father wrongly assumed that a middle-school aged boy had abducted his daughter, and attacked him in a public restaurant, according to Chinese news on the Guangdong Public Channel.

The incident occurred on July 12 in Guangzhou City in China’s southern Guangdong Province. The boy, surnamed Tang, was hospitalized with minor injuries, while the attacker was detained by police on the same day.

The attacker’s daughter had run away from home on her own volition. As fate played out, the girl walked into a restaurant where she met Tang for the first time, according to the Guangdong Public Channel.

The father, who was not named in the report, was detained for five days and given an unspecified fine.

The girl had previously run away from home, but the report by Cover News did not give a specific time duration.

Security footage showed the girl entering into a milk-tea house, similar to coffee houses in the west. Milk-tea houses are a popular hangout for students in China.

After she walks in, she immediately sits next to a boy on a couch. He shifts in the seat and scoots away from her as she asks him if she can borrow his cellphone.

“I didn’t have a phone, so I asked one of my classmates to lend his phone to her,” Tang told the Guangdong Public Channel. “Then, the girl’s parents came up.”

The edited video footage doesn’t show the girl’s parents entering the milk-tea house and only shows when the attack was taking place. The girl’s much larger father can be seen slugging Tang’s head and body, and at one moment holding the boy down onto the couch and pummeling him.

Tang didn’t physically resist throughout the abuse. The man further threatened to bludgeon him with a fire extinguisher, according to the Guangdong Public Channel.

“He didn’t even ask, he just came up and attacked my son,” Tang’s father told the Guangdong Public Channel. “I can’t even bear to hit my own son, and you beat him to this extent.”

Tang’s father explains that the girl’s dad makes a quick assumption based on where the girl was sitting and holding a phone. “He thought that my son had kidnapped his daughter,” Tang’s father told the Guangdong Public Channel. “My son doesn’t even go to the same school as his daughter.”

“They don’t even know each other.”

Later, the girl’s father can be seen pacing around the room while her mother lectures her. Tang continues sitting on the couch.

Later, the police came and detained the girl’s father.

“I saw [her father] at the police station, and I asked him if he attacked my nephew,” Tang’s uncle told the Guangdong Public Channel. “He said, ‘yes, I attacked him. I got the wrong person.'”

“The way he talked at that time really made me mad; he had no sense of regret.”

The girl’s father was sentenced to detention for five days for attacking Tang, and given a fine. The amount was not reported.