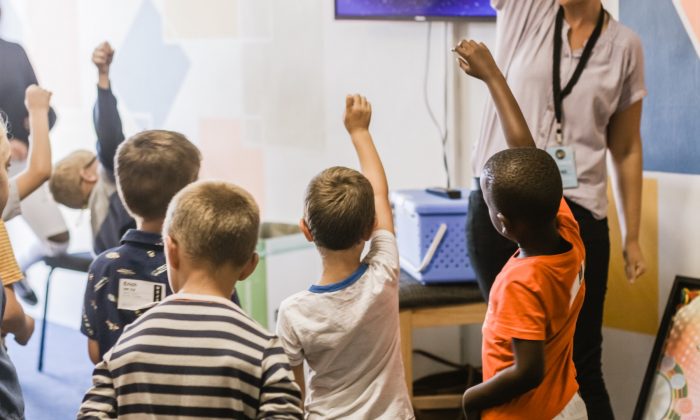 Children raising hands in a classroom. (Nicole Honeywill/Unsplash)
US News

A Massachusetts father has been arrested and faces charges after his five-year-old son allegedly took a bag of heroin stamped with Spider-Man to school, Daily Hampshire Gazette reports.

Twenty-nine-year-old Benny Garcia pleaded not guilty in Holyoke District Court on Friday on charges of drug possession, distribution, and reckless endangerment of a child, according to the publication.

The father is being held without bail until his dangerousness hearing, which is scheduled for Nov. 20.

Garcia was apprehended by police on Thursday on a warrant for a 2018 drug possession charge. In court, Judge William Rota ordered him to be held until the dangerousness hearing and revoked his bail on the previous charges.

Holyoke Police Lt. James Albert said that officers were notified about the incident at Lawrence School around 11 a.m. on Thursday after the child’s teacher noticed him showing another boy something and asked what it was.

The five-year-old was allegedly holding a bag of white powder with three Spider-Man stamps on it and told one teacher that he “turns into Spider-Man” when he puts it in his mouth, Albert said.

The lieutenant added that the child was taken to the hospital immediately and is doing well but it is not clear if he ingested any of the drugs, although it is “certainly possible that he did.”

According to Albert, the boy told officers that he had found the bag of drugs at home and had more under his bed, prompting a search of his home with consent from the boy’s mother.

Upon arriving at the home, police found Garcia lying in bed nearly unconscious and when attempting to lift him out of the bed to handcuff him, the Spider-Man bags began falling out of his hoodie’s pocket. They also found multiple bags on his bed that contained white powder.

Child services reportedly took custody of the boy and an infant who was not in the home at the time of the arrest.

Their mother is not facing any charges, though Albert said the case is still being investigated.

In court, Assistant District Attorney Matthew Green called the situation “a particularly shocking and egregious fact pattern,” and praised the principal of Lawrence School, Cathy Hourihan, who he said “did a super job handling this.”