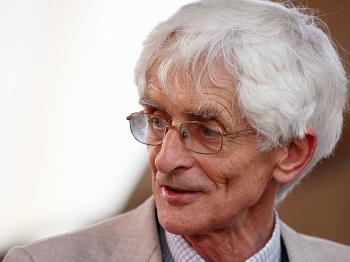 Dr. Jim Swire attends the debate over the handling of the release of the terminally ill Lockerbie bomber Abdel Baset al-Megrahi, at the Scottish Parliament on September 2, 2009 in Edinburgh, Scotland. (Jeff J Mitchell/Getty Images)
Europe

Stephen Jones
View profile
Follow
biggersmaller
Print
The father of a woman who died in the Lockerbie bombings has travelled to Libya to visit the man convicted of the terrorist attack.

Jim Swire, a Briton, spent an hour with Abdelbaset Ali Mohmed Al Megrahi, the man convicted of helping to bring down Pan Am flight 103, in the skies over Lockerbie, Scotland, in 1988.

Swire’s 23-year-old daughter Flora was among the 270 victims of the bombing, yet Swire remains convinced of Al Megrahi’s innocence.

Al Megrahi served eight years of a 20-year sentence, and was released on compassionate grounds last year after he was diagnosed with prostate cancer and given only months to live.

Swire met him last weekend in a hospital ward in Tripoli, where he is undergoing treatment for his cancer.

“I was very relieved to see him as well as he was. He is a very sick man but he can get out of bed and walk, though not very far,” said Swire, 74, in a statement, following the meeting.

“I think one of the reasons he has lived so long is he has had good treatment in Libya and he has been returned to his family and his community and his country.

“These are a huge relief to the body in fighting cancer because your immune system depends very heavily on how much stress you are under.”

The fact that he has outlived expectations of doctors have led many to suggest that his release was a political decision, a suggestion which has been strongly denied by the Scotts leadership.

Al Megrahi, who lives in a secluded villa in Tripoli and emerges only to undergo hospital treatment, has long denied responsibility for the attack.

He was given a chance to appeal the charges against him when the Scottish Criminal Cases Review Commission (SCCRC) said there were grounds to believe a miscarriage of justice had occurred.

However Al Megrahi dropped his appeal when he was given only three months to live and was offered the opportunity to be released on compassionate grounds.

Swire, who last met the former Libyan intelligence agent in December 2008, has spearheaded a campaign to have his case reviewed. Swire said that he would consider visiting him again.

“When I go to see him it is not that difficult because I don't feel I'm going to see my daughter's murderer because I am satisfied he didn't do it,” he said in a statement.