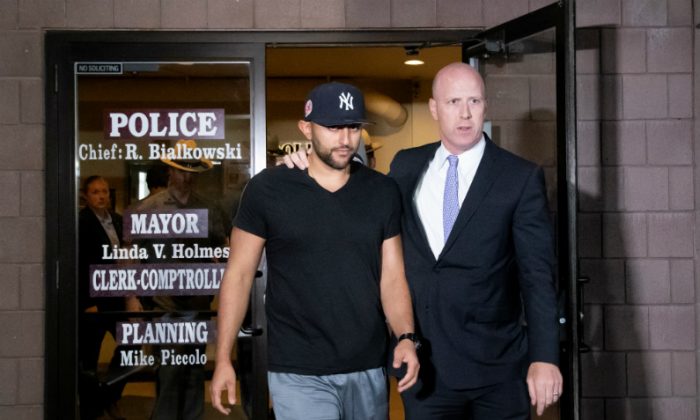 Nauman Hussain (L), the operator of a limousine company that owned the vehicle involved in a crash that killed 20 people in upstate New York, leaves with his lawyer Lee Kindlon (R) after posting bond at Cobleskill Town Court in Cobleskill, New York, on Oct. 10, 2018. (Cindy Schultz/Reuters)
Crime and Incidents

The parents of a woman killed in a fatal limousine crash in upstate New York in October filed a lawsuit against the owner and the operator of the chauffeur company on Nov. 19, alleging wrongful death and negligence in allowing the vehicle on the road after failing inspections.

Amanda Rivenburg was among 20 people killed in the Oct. 6 crash.

The Ford Excursion limousine carrying 17 people to a birthday party ran a stop sign at a highway intersection in Schoharie, about 40 miles (65 km) west of Albany, officials said.

It crashed into an unoccupied parked vehicle and two pedestrians before coming to a halt in a shallow ravine, officials said. The driver, all 17 passengers, and the two pedestrians were killed.

Nauman Hussain, operator of Prestige Limousine & Chauffeur Service, has been charged with one felony count related to the deadliest U.S. transportation accident in nearly a decade. He pleaded not guilty to criminally negligent homicide. The office for Hussain’s lawyer declined to comment on the lawsuit.

Shahed Hussain is Nauman’s father and the owner of Prestige Limousine. Neither Shahed Hussain nor a lawyer representing him could immediately be reached for comment.

The limousine failed an inspection in March when it was issued violations for having 18 seats installed while only being certified to carry a maximum of 10 passengers, the complaint said.

The vehicle failed another inspection in September when it lacked a federal certificate to operate, had mechanical issues with its brake systems, defective emergency exits, and windshield wipers.

The limousine was ordered taken out of service in September and had an “unserviceable” sticker on the windshield, which was removed by the defendants or their agents, the complaint said.

The driver, 53-year-old Scott Lisinicchia, did not have the proper license to operate the 2001 Ford Excursion limousine, police said.

Online obituaries said Rivenburg, 29, earned a bachelor’s degree from SUNY Plattsburgh and worked in Albany as an assistant director at Living Resources, an organization that assists and supports disabled people.