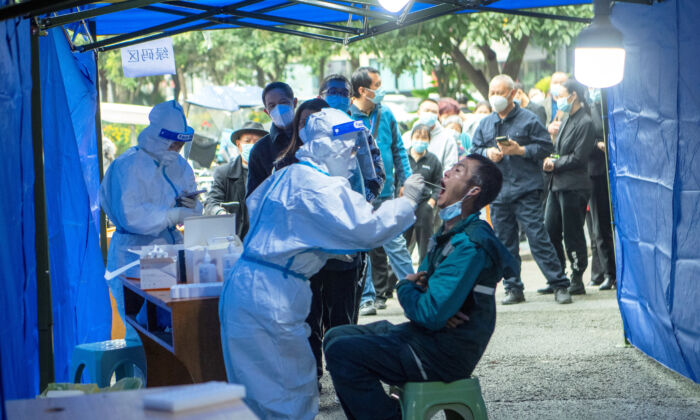 People line up at a makeshift nucleic acid testing site near a residential compound under lockdown in Chengdu, Sichuan Province, China, on Nov. 3, 2021. (cnsphoto via Reuters)
INSIDE CHINA

Two, more infectious, COVID-19 Omicron variants were detected in China, and a new round of outbreaks has quickly spread to more than 20 of China’s 31 provinces in 2 weeks. Two big cities in western China have been locked down, while major Chinese port cities are conducting mass testing. All of this is sparking concerns about more lockdowns and economic repercussions.

Fourteen COVID-19 cases were reported on July 17 in China’s southwestern city Chengdu in Sichuan Province. The patients are infected with Omicron variant BA.2.12.1, which hadn’t been seen in China before.

According to mainland Chinese media China Business Network, as of July 18 as many as 10 subvariants of Omicron have been detected across the country since the first locally confirmed case of BA.5 variant was reported in China’s megacity Xi’an on July 6.

Public research data shows that the Omicron BA.2.12.1 variant strain is more infectious than the original variant of Omicron. Its transmission speed is 1.2 times that of the BA.2 variant. Both BA.2.12.1 and BA.5 can escape vaccine-elicited antibodies.

On July 18, authorities ordered a 7-day lockdown of Chengdu, the provincial capital with a population of 16.3 million. During that time, nobody is allowed to leave the city without a negative COVID-19 nucleic acid test result from the last 48 hours.

The official notice also states that indoor entertainment venues such as bars, KTVs, gyms, and various public cultural and sports venues in the city are temporarily shut down. Large-scale conferences are not allowed to be held in the city for the time being, in-person training and religious activities are suspended, no catering services for banquets, and various clinics are prohibited from accepting patients with a fever.

As the more infectious variants BA.5 and BA.2.12.1 are spreading in China, authorities in more big cities have ordered lockdowns, partial lockdowns, or district control.

Many areas in Lanzhou, the capital city of Gansu Province, population 3.8 million, are under lockdown, and nearly 10,000 residents have been sent to centralized isolation facilities for quarantine due to the new outbreak.

Ms. Chen, the owner of a restaurant in Chengguan District of Lanzhou, told The Epoch Times on July 18 that the city was shut down last week. “The epidemic here is very serious. The entire area is locked down. All shops and restaurants have been closed since last week. Everyone is ordered to stay at home and not allowed to go out.”

Ms. Zhang, a resident of Yantan Road of Chengguan District in Lanzhou City also told The Epoch Times on July 18 that the city was already under lockdown.

“Because of the outbreak, the whole city of Lanzhou is shut down. You can’t get in. There are policemen standing on the streets, and you are not allowed to walk on the street. Taxi services are stopped. All the communities [neighborhoods] in the city are closed.”

The Epoch Times called Yanbei Street office in Chengguan District and the Lanzhou CDC but couldn’t get through.

Meanwhile, mass COVID-19 testing is conducted in the mega port cities of Shanghai and Tianjin, sparking fears of another round of city-wide lockdowns that would further worsen the Chinese economy and disrupt the global supply chain.