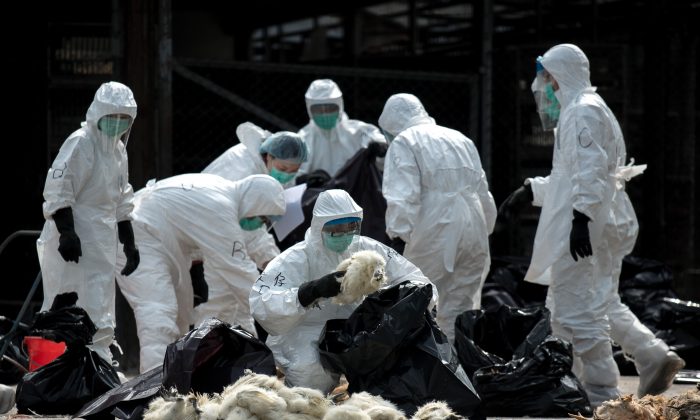 Several influenza viruses, including bird flu and swine flu, that have rapidly spread to eight Chinese provinces, including the two municipalities Beijing and Shanghai, are steadily gaining pace from day to day and causing national panic. At least 181 human cases of influenza viruses with 38 fatalities have been confirmed since January, according to data compiled from reports by local authorities.

The first recognized case of H7N9 human infection emerged in east China last March. The virus re-emerged in October and has rapidly spread since January, primarily in southeast China. According to China’s Center for Disease Control and Prevention (China CDC), on average, five to seven cases of H7N9 are reported daily, with numbers increasing.

Zhejiang Province has reported the most cases–77 cases with 12 deaths have been confirmed. Li Lanjuan, professor and chief physician at the First Affiliated Hospital of Zhejiang University School of Medicine predicts a large rise in infections this winter.

“The H7N9 flu virus is known to be more active in the winter. There will be an increasing number of cases in the coming months in Zhejiang, even bigger than the cases being reported,” Li was quoted by Zhejiang News Online.

According to the Geneva-based World Health Organization (WHO), as of Jan. 28, the case fatality rate of all confirmed cases in 13 provinces and municipalities in east China, Hong Kong (Special Administrative Region of China), and Taipei CDC is 22 percent, but many cases are still hospitalized.

As the H7N9 death toll rises, there has been growing panic among the public.

“Everyone is now panicking over the bird flu,” said Shen Jianmin, a resident in Zhejiang. “Worried about a deadly influenza pandemic, people wear masks and don’t eat poultry or meat.”

Among the 37 confirmed fatalities is a 31-year-old surgeon from the Shanghai Pudong New Area People’s Hospital. His death from the bird flu was identified on Jan. 18, with the source of infection unknown.

Shanghai resident Ms. Li told Epoch Times: “Even the doctor as a patient couldn’t be treated successfully, to say nothing of ordinary people.”

Ms. Li was also doubtful about the accuracy of reported fatalities. “The government has definitely not reported the real death toll,” Li said. “Now all the major hospitals in Shanghai are full of patients with flu-like symptoms. We’re really scared of the spread of bird flu, even not daring to go to a hospital for treatment of minor illnesses,” she added.

A female doctor at the hospital where the surgeon died, speaking on condition of anonymity, said: “Because the H7N9 virus is more transmissible and harder to detect than H5N1 bird flu, we doctors even fear the prospect of human-to-human transmission of this virus.”

Mr. Ye, a resident from Guangdong, the province with the second most cases–60 with 13 deaths have been recorded since August of last year, told Epoch Times: “Increased cases of the bird flu raise concerns about the potential of more widespread infections and transmission to humans. So live chicken sales are banned here and even restaurants have removed chicken dishes from their menus.”

Beijing resident Mr. Yuan told Epoch Times that people are scared at the mere mention of the bird flu. They don’t even dare to eat chicken and eggs, and try to stay home for fear of getting bird flu, he said.

Multiple cases of family cluster infections have also been reported, indicating human-to-human transmission. If the virus mutates into a form that can directly pass between humans, it could result in the disease spreading rapidly, causing global epidemics, according to Chen Taoan, former director of the Information Division of Shanxi’s CDC.

According to the U.S. CDC, there are three types of influenza viruses, classified A, B and C. Only influenza type A and B viruses that routinely spread in people are responsible for seasonal flu epidemics each year.

Type A influenza viruses are further divided into subtypes on the basis of two proteins on the surface of the virus, the hemaglutinin or “H” protein and the neuraminidase or “N” protein. There are 18 known H subtypes (H1 to H18) and 11 known N subtypes (N1 to N11), possibly generating 198 different combinations of these proteins such as H1N1 and H7N2.

According to the WHO and CDC, wild aquatic birds, in particular certain wild ducks, geese, and swans are the natural hosts for all known influenza A viruses. Type A influenza viruses infect a range of avian species and mammals like pigs and horses, whereas type B and C infections are largely restricted to humans.

“Usually these human infections of zoonotic influenza are acquired through direct contact with infected animals or contaminated environments, and do not spread very far among humans. If such a virus acquired the capacity to spread easily among people either through adaptation or acquisition of certain genes from human viruses, it could start an epidemic or a pandemic,” the WHO said.

H7N9 has been identified as one of the most lethal influenza viruses. “When we look at influenza viruses, this is an unusually dangerous virus for humans,” Keiji Fukuda, the WHO’s assistant director-general for Health Security and Environment, said last April.

One of the biggest problems with H7N9 is that the source of human infections has not been identified yet. In their paper published on May 2013 in The Lancet, Chinese researchers revealed that the H7N9 virus, based on past experience and epidemiological investigation, might be carried by infected poultry, but about 40 percent of the patients have not been in contact with poultry. The finding implies that it’s harder to prevent further spreading of the infection.

Because the H7N9 virus does not appear to cause clinical symptoms in infected poultry, clear links between infections in poultry and human cases have been difficult to establish, according to the WHO.

The absence of illness symptoms in birds carrying the H7N9 virus also makes it impossible to detect whether birds are infected, showing experts few signs as to where the flu might spread, and making the virus extremely difficult to detect, according to a research paper published on January 2014 in Chinese Medical Journal cmj.org.

“It could be that the infected animals might not shed the virus for more than a few days, so it is a matter of chance if you test and find it. It might be that they are not sampling enough animal species, and they may have to take a look at the less common species of birds being sold in Chinese markets,” the paper quoted Ho Pak-leung, associate professor in the Department of Microbiology at the University of Hong Kong.

Many people have speculated about the official number of H7N9 cases reported by Chinese authorities.

According to the female doctor in Shanghai who spoke to Epoch Times on condition of anonymity, Chinese official data are used for maintaining social stability and to prevent panic among the public. Therefore, authorities will often withhold the true number of infected people from the public.

“Sporadic cases are currently being reported by different provinces and municipalities, without the total number of cases published by the state. This is a measure commonly employed by the Chinese communist regime. They tend to see the Chinese New Year as a big sales occasion that helps boost the gross domestic product (GDP).

“If they report the true scale of the epidemic, they fear this will cause widespread public alarm. Consequently, the national industrial production chains would be hard hit and domestic market sales would then slide downward to a large extent, causing weak economies being devastated. Then a major economic panic may sweep the nation with declining GDP.”

A female employee who answered the phone at China CDC said that since the second half of last year, the authorities have adopted a degrading tactic to tackle H7N9 in China; they use a monthly reporting system in line with state guidelines, instead of daily incident reports.

Asked about the actual fatality rate, the woman said: “January data will be released on Feb. 10. The true tally in January is much greater than that in those provinces. I can’t answer that, though.”

According to another employee at China CDC, there have been more human cases of H7N9 in Beijing, but the true number is not clear.