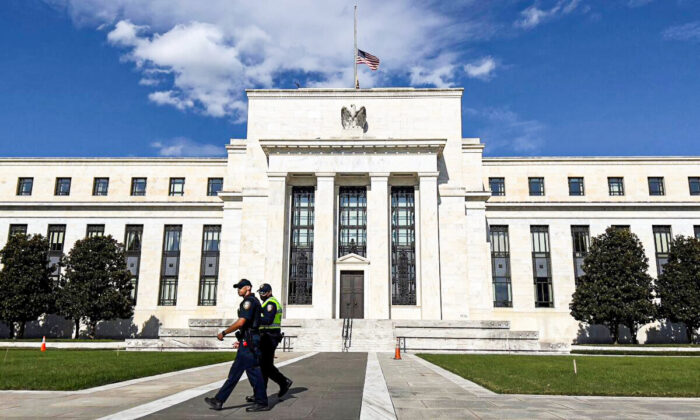 The latest debate on Wall Street is on whether the Federal Reserve will be aggressive or cautious when raising interest rates.

Last week, the U.S. annual inflation rate surged to a market-defying 40-year high of 7.5 percent in January. Prices were up across the board, from food to energy to shelter.

The reading ignited discussions on how the U.S. central bank would respond at the next Federal Open Market Committee policy meeting in March. Would Fed Chair Jerome Powell and the rate-setting committee vote for a 25- or 50-basis-point rate increase?

St. Louis Fed Bank President James Bullard ignited controversy in recent days for telling Bloomberg on Feb. 11 that he would “like to see 100 basis points in the bag by July 1.” He reiterated this position in an interview with CNBC on Feb. 14, arguing that the Fed’s “credibility is on the line” based on how it responds to the “inflationary shock.”

Since Bullard’s hawkish comments, financial markets have started pricing in seven rate hikes this year. Most investors are now anticipating a 50-basis-point move in March, according to the CME Group FedWatch Tool.

But several of Bullard’s colleagues disagree with a half-percentage-point increase next month.

While supporting a faster pace of rate hikes and winding down the more than $8 trillion balance sheet, Cleveland Fed Bank President Loretta Mester stated on Feb. 9 that it’s vital to approach interest rates on a meeting-by-meeting basis.

Since inflation is way beyond the Fed’s conventional 2 percent target rate, “we need (month-over-month) readings to trend around at 0.18 percent,” James Knightley, chief international economist at ING, said in a note.

“None of the major components are close to this,” Knightley said. “As such the risk of a 50bp move is on the rise for March. We will have to wait to see how the individual members are seeing things, but after a strong jobs number last week the case for taking some steam out of the economy is getting stronger.”

ING anticipates five rate increases this year, with inflation remaining in the 3 to 4 percent range ahead of the midterm elections in November.

Raising rates may not be the only cure for inflation, says Ipek Ozkardeskaya, the senior analyst at Swissquote Bank.

“The Fed cannot do miracles by hiking the rates faster as inflation doesn’t necessarily come from the demand side. One of the biggest drivers of higher consumer prices has been the supply chain crisis,” she wrote in a research note.

“And if rising the rates doesn’t bring inflation down, it could cause recession,” Ozkardeskaya added. “Therefore, the Fed’s got to find the right balance, to be patient and to tighten gradually.”

Over the past month, there has been growing talk about stagflation or even a recession, with more market analysts discussing the heightened possibility amid aggressive tightening.

“Engineering a soft landing for the economy is never easy,” Deutsche Bank analysts stated. “It is especially difficult with inflation well above target and accelerating at a time when the unemployment rate is already at the Fed’s view of maximum employment.”

An increasingly pessimistic consumer and a more forceful inflation-fighting central bank “raises recession risks in 2023 and 2024,” the financial institution said.

The U.S. financial markets have been on the decline this year, mainly in response to the growing prospects of the central bank ending the pandemic era of cheap money.

Year-to-date, the Nasdaq Composite Index has slumped about 12 percent. The Dow Jones Industrial Average has lost roughly 5 percent, while the S&P 500 has shed about 8 percent.

Investors have been pouring into conventional safe-haven assets, such as the U.S. dollar, bonds, and gold.

The U.S. Dollar Index (DXY), which gauges the greenback against a basket of currencies, has risen more than 1 percent over the past month, bringing the measurement into positive territory on the year. A stronger buck is generally bad for dollar-denominated commodities because it makes it more expensive for foreign investors to purchase.

U.S. Treasurys have been popping this year, with the benchmark 10-year yield flirting with the crucial 2 percent threshold. The one-year bill has topped 1 percent, while the 30-year bond is eyeing 2.8 percent.

Gold has been perhaps the most surprising to many analysts. Typically, a rising-rate environment is bearish for the yellow metal because it increases the opportunity cost of holding non-yielding bullion.

Markets are pricing in several rate hikes over the next 10 months, but “even at 50 basis points, the Fed talk seems to be behind the curve,” says Kevin Rich, a consultant to the Perth Mint.

“Despite these anticipated hikes it still leaves us in a negative rate environment, which is bad for consumer purchasing power but good for Gold prices,” Rich told The Epoch Times.

There is still plenty of uncertainty ahead because investors need to witness the number and frequency of these rate hikes, so a single 25-basis-point move is “neither bullish nor bearish” for the precious metal.

“Until we see a more consistent trend in data on labor, GDP, and rates we expect to see gold prices stay strong relative to that uncertainty,” he added.

Experts assert that the Fed’s quantitative tightening campaign, along with geopolitical tensions in Eastern Europe, is spooking the markets. Whether investors will maintain their buy-the-dip mentality in this unclear equities arena or not remains to be seen. Until then, traders will be keeping an eye on opportunities while also seeking shelter in safe-haven assets.