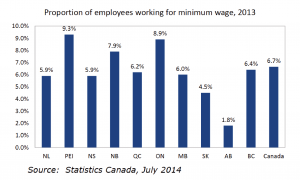 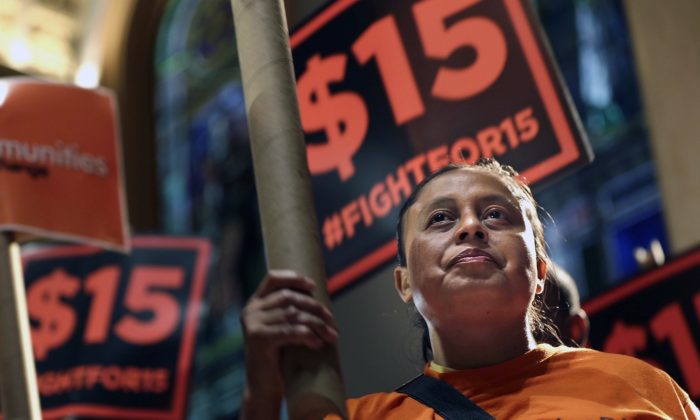 Demonstrators rally for a $15 minimum wage before a meeting of the wage board in New York. (Seth Wenig)
New York

NEW YORK—Fast-food workers rallied at a church and testified before Gov. Andrew Cuomo’s wage board on Monday, demanding a pay increase to $15 an hour that restaurant industry representatives deemed a potential jobs-killer.

Many expressed concern about their ability to make rent payments.

Many fast-food employees said they work fewer than 30 hours a week and in some cases work on call. Several said some weeks they didn’t work any hours at all, and others testified they live in overcrowded apartments and struggle to support their families.

Many expressed concern about their ability to make rent payments, as Albany worked on a New York City rent control bill that was set to expire at midnight.

Your Chipotle Burrito Just Got Better, and It’s Not About the Taste

Jason Rice, 31, of Brooklyn delivers pizzas as well as holding down two other jobs.

“Fifteen dollars wouldn’t be enough to live in New York City as well, if you did the math,” he said. “But it’s a start.”

Seattle-based venture capitalist Nick Hanauer joined the rally at Judson Memorial church and testified before the board, citing his native city and San Francisco as examples where a wage increase actually resulted in employment numbers going up.

But the head of the New York State Restaurant Association said those cities were phasing in wage increases and haven’t hit $15 an hour yet.

“A more gradual buildup would be far more acceptable to the restaurant community than a dramatic increase,” Melissa Autilio Fleischut said.

Opponents such as the Employment Policy Institute—a fiscally conservative think-tank—say the comptroller’s numbers assume that all employees will keep their jobs and hours.

Any increase would need the approval of Cuomo’s labor commissioner, but would not need legislative approval.