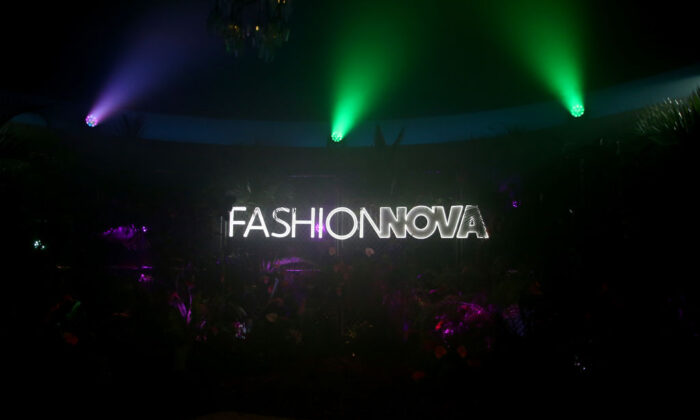 A view of the atmosphere at Fashion Nova Presents: Party With Cardi at Hollywood Palladium in Los Angeles, Calif., on May 8, 2019. (Tommaso Boddi/Getty Images for Fashion Nova)
Companies

Fast fashion retailer Fashion Nova will pay more than $4 million in a settlement with the Federal Trade Commission (FTC) over allegations that it concealed negative customer reviews of its products.

In a complaint, the FTC alleged that between late 2015 and November 2019, the California-based retailer used a third-party online product review management interface to automatically post four- and five-star reviews to its website and block reviews with lower stars from being posted, pending the company’s approval.

However, Fashion Nova allegedly did not approve the “hundreds of thousands of lower-starred, more negative reviews.”

The case is the FTC’s first involving a company’s efforts to conceal negative customer reviews.

Under the proposed settlement (pdf) between the FTC and Fashion Nova, the company will pay $4.2 million for “harm consumers incurred.”

It will also be barred from making misrepresentations about any customer reviews or other endorsements and must post all customer reviews on its website unless such reviews contain obscene, sexually explicit, or inappropriate content.

In addition, the FTC said it is sending letters to 10 companies that offer review management services, putting them on notice that avoiding the collection or publication of negative reviews violates the FTC Act.

The FTC has also released new guidance for online retailers and review platforms to “educate them on the agency’s key principles for collecting and publishing customer reviews in ways that do not mislead consumers.”

In an emailed statement to The Epoch Times, Fashion Nova called the allegations “inaccurate and deceptive” and claimed the company has never concealed negative customer reviews of its products.

Fashion Nova “immediately and voluntarily addressed the website review issues when it became aware of them in 2019. Fashion Nova is highly confident that it would have won in court and only agreed to settle the case to avoid the distraction and legal fees that it would incur in litigation,” company spokesperson Terry Fahn said.

Fahn told The Verge that the company had relied on third-party software to “auto-publish” star ratings and had “inadvertently failed” to publish the lower-star reviews that the software had held for manual approval due to “certain resource constraints during a period of rapid growth.”

The spokesperson said that the same issue had been fixed several years ago and that all of the previously unpublished reviews had now been posted to the website, as long as they did not contain obscene, sexually explicit, or inappropriate content.

This is not the first time that the FTC has bought a case against the online retailer, which claims it was the most searched fashion brand on Google in 2018.

In April 2020, the company agreed to pay $9.3 million to the FTC to settle allegations that it had violated the agency’s Mail, Internet, Or Telephone Order Merchandise Rule (the Mail Order Rule) when it failed to properly notify consumers of shipping delays and give them the chance to cancel their orders in a timely manner.

The 2020 complaint also alleged that it had used gift cards to compensate consumers for merchandise that hadn’t shipped instead of providing them with monetary refunds, in violation of the law.

Correction: This article was amended to reflect the nature of the settlement with the FTC. The Epoch Times regrets the error.