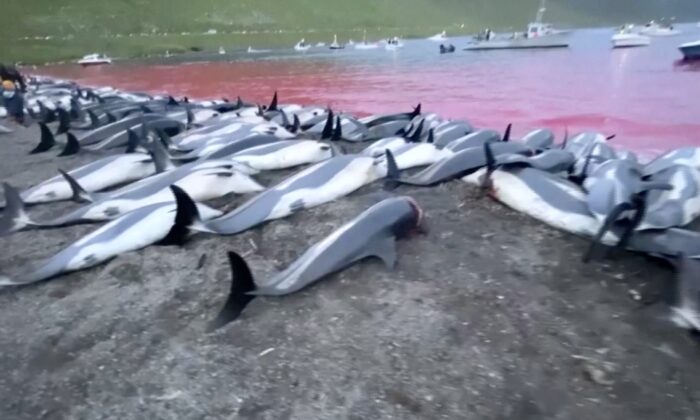 Dead dolphins on beach and in water in Skalafjorour, Faroe Islands, on Sept. 2, 2021. (Sea Shepherd/Screenshot via The Epoch Times)
Europe

COPENHAGEN—The Faroe Islands said on Thursday it would review regulations governing its centuries-old tradition of hunting dolphins after graphic footage of the slaughter of a record catch of hundreds prompted an outcry.

More than 1,400 Atlantic white-sided dolphins were herded into shallow waters by boats and jet-skis then killed on a beach on Sunday, the Sea Shepherd Conservation Society campaign group said.

The U.S.-based organization released footage showing people turning the water red as they cut some of the dolphins with knives. It described the hunt as “brutal”.

The Faroe Islands has defended its tradition—known as the grind (or Grindadrap in Faroese)—of shoring up pods of dolphins or whales and slaughtering them on beaches for decades.

But the government of the North Atlantic archipelago said in a statement on Thursday the latest catch had been “extraordinary” due to the size of the pod and it would look into regulations around the practice.

“We take this matter very seriously. Although these hunts are considered sustainable, we will be looking closely at the dolphin hunts, and what part they should play in Faroese society,” Prime Minister Bárdur á Steig Nielsen said.

Meat from the hunt is traditionally divided among the islanders.

Hogni Hoydal, leader of the opposition Republican Party and a former fishery minister who co-created the current whaling legislation, told Reuters he got around 50 kilograms (110 pounds) of the delicate and lean dolphin meat delivered to him on Monday.

“My claim is that the Faroese whale and dolphin killing, as long as the population is not threatened, is probably the most sustainable use of natural resources that we see in the modern world,” Hoydal said.

“But I do understand that some react to the number (of slaughtered dolphins) and that it is obviously a bloody affair,” he added.

Around 4–5,000 residents have collected their share of the catch, all of which was given away for free, Hoydal said.

Sunday’s catch was a record, the government said. On average, around 250 dolphins and 600 pilot whales are caught every year in Faroese waters, it added.